Pete Palmer Has A New Book

Well,  maybe not real new since it came out last September. Tom Tango mentioned this at his blog. It is called Basic Ball: New Approaches for Determining the Greatest Baseball, Football, and Basketball Players of All-Time. Here is the Amazon description:


"Basic Ball is a three-for-one deal. Fans who enjoy the three American Sports - football, baseball and basketball - will love Basic Ball. Pete Palmer, inventor of the on-base percentage stat and winner of the 2010 Ralph Hay Award from the Professional Football Research Association, has combined with Dave Heeren, creator of the TENDEX formula for basketball to give the reader the most effective statistical methods for rating players and teams in these three sports. They introduce new theories and formulas to analyze the players at the basic level. Each sport is covered in a full section and more than a hundred pages of databases that give statistical ratings for baseball's greatest hitters and pitchers; the best NFL players of All-time; and every active and retired NBA and ABA basketball player."

Which number do you think is lower: Lincecum's ERA+ or Pujols' OPS+? Lincecum has 57 and Pujols has 68 (100 is average in each case and so this means each guy is performing well below average). Who would have thought this at the beginning of the year? Lincecum might be a victim of bad luck. Here are some key stats each year of his career:

He is doing well in strikeouts and HR prevention. But his hits and walks are high and some of the bad luck might just be the high average on batting average on balls in play, which pitchers don't have as much control over. But he just happens to be pitching poorly with runners in scoring position and with with runners on. That is not true for his whole career. The next table shows this: 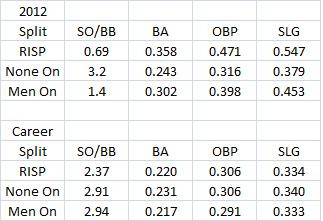 This year he has done well with no runners on but in other cases not so well. He has no problem like this over his career and so I think his ERA+ should rise over the season.

This year his SO/AB rate is .129, just a little higher than his career rate of .112. But his BB/AB rate is only .045 while it is .113 for his careeer (in both cases, intentional walks were taken out). So he is not walking alot and maybe he is swinging at too many pitches.

How Is That 23 Year Old Phenom Pitcher Doing? You Know, The One Whose Last Name Starts With S?

Oh, you mean Chris Sale of the White Sox. Pretty well. His career stats are in the table below. 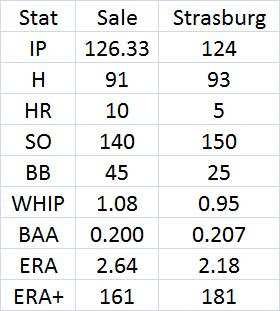 Now his being a reliever in 2010-11 helps, since relievers usually have better stats than starters. From 2007-11, relievers had, on average, an ERA that was .037 lower than starters. Sale, a lefty, also has faced left handed batters about 40% of the time. So that helps him. But he is certainly doing well this year as a starter. In 32 IP, he has an ERA of 2.81, with 24 hits allowed and 8 walks, 29 strikeouts and just 2 HRs allowed. If Strasburg had Sale's career stats or stats this year, I doubt anyone would think he was not living up to his potential.
Posted by Cyril Morong at 7:50 PM 3 comments:

Pujols Has His Worst Month Ever In OPS+, By Far

The table below shows his OPS+ for every month of his career. 100 is average and it adjusts for the league average in each month and park effects. Now this April was his worst calender month. It is possible that he had a worse 23 game stretch sometime in his career (he played 23 games in April). But when you look at each individual month, it is hard to see when that would have happened because he would have had to offset an OPS+ of 63 with an extremely high one in the other games. 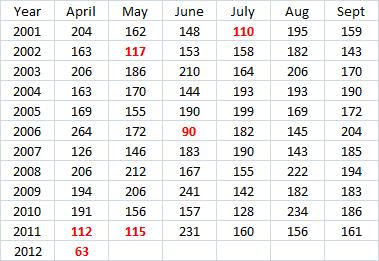 Posted by Cyril Morong at 5:08 AM No comments: