He is currently 6th in the AL in WAR. He has never finished in the top 10 before and he is 36 (or was as of June 30). Off the top of my head, I can't think of anyone who might have cracked the top 10 for the 1st time so late in his career. Who else might have done something like this?

Chipper Jones Is In A League All By Himself

Answer tomorrow. It was fun for me to discover who they were. Two will seem obvious but the third one might not. I imagine alot of people will go to Baseball Reference or use the Lee Sinins Complete Baseball Encyclopedia. Two are among the all-time greats (one is a household name while the other is among baseball fans, too) while the 3rd was just very good and is probably not a household name and maybe never was.

Who Was The Most Surprising Triple Crown Winner?

This is similar to a couple of posts that I did last April. See Who Was The Least Likely Triple Crown Winner? and Baseball's Elite, Its Millionaires. In those posts I used all of a player's career stats to determine the rankings (Ruth was the most likely to do it among the guys who never did). Here I looked at each guy who won the triple crown but his rating was based only on what he did before his triple crown season. For Williams and Hornsby, I used their first time (I also only looked at guys since 1900 this time).

A player would get 10 points for each time he led his league in HRs, 9 for a 2nd place, etc. The same was done for AVG and RBIs. So the player had a career total number of points for each stat. A tie for 1st was still worth 10 points. Then those three numbers were multiplied times each other (meaning if a player never finished in the top 10 in one of these stats, his total will be zero).

So Yastrzemski was the most surprising. He did not make the top 10 in either HRs or RBIs in his six seasons before he won the triple crown (he was also the least likely to win using career data since 1900). Cabrerra would not be that big of a surprise, especially considering that he has led the league in all three stats in different years already. Gehrig was not a surprise at all he had been in the league leaders for several years in all three stats many times. Maybe his age of 31 made it a little more surprising. But it is not like his career was in decline before that. 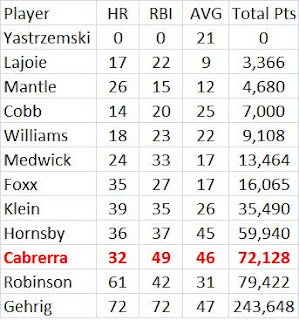 Maybe as wise as Fred Merkle. At least the White Sox won't lose a playoff spot or first place finish in this case. Check what happened in the 8th inning today.
Posted by Cyril Morong at 2:27 PM No comments: 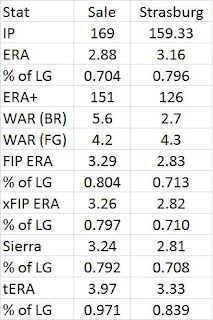 BR means Baseball Reference and FG means Fangraphs. I don't know why they are so different on WAR. I also don't know if FIP, xFIP, Sierra and tERA are park adjusted. It looks like BR gives Sale about a 106 for pitching in U.S. Cellular Field and Strasburg does not seem to get adjusted much, so his park must be neutral. So for the league %'s on FIP, xFIP, Sierra and tERA, we could multiply what Sale has by about .94. He would still be higher than Strasburg, but  a little closer.
Posted by Cyril Morong at 6:49 PM No comments:

He is at 9.9, tying him for the 47th best season with Ernie Banks (1959) and Rogers Hornsby (1927). Trout bats leadoff and last year in the AL leadoff men got 6-7% more walks + ABs than a cleanup hitter (I guess that most of the great seasons were by 3 and 4 hitters). Should we reduce his offensive WAR by that much to equalize things? I don't know, but even if we did, it would only lower his offensive WAR to 6.862 (I lowered it 6%). But with his defensive WAR of 2.7, it would still leave him with a WAR of 9.5-9.6, tied for no worse than 64th.  If we stick with his WAR of 9.9, the only players to ever have a better season than that who are not in the Hall of Fame are Barry Bonds, Sammy Sosa and Alex Rodriguez.

Update: Through games of Sept. 30 he is back up to 10.5. The Angels played a doubleheader on Sept 30 after being rained out the day before.

One Possible Key To The Orioles

They are now tied for 1st place with the Yankees yet they have a run differential of -19. Their record is 76-59 and 24-7 in 1-run games. Here is one thing that might be the difference. Their batters have an OPS of .722 while their pitchers have allowed an OPS of .724. That should give them just about a .500 record. But in close and late situations their batters have an OPS of .697 (probably a typical dropoff) but their pitchers allow just a .598 OPS. Maybe that is why they wins so many close games.

In non-CL situations the Orioles have about a .727 OPS and their pitchers allow a .747 OPS. Here is my formula for predicting winning pct. using non-CL OPS and CL OPS (both for batters and what is allowed)

That would give them a .526 Pct. Then they should have 71 wins but they really have 76. So there are still 5 wins not explained.

Baseball Reference gives the Orioles hitters a clutch rating of 2.9, meaning that they tend to hit better the more runners on base, the closer the score and the later the game. So they have won 2.9 more games than you would expect from their hitting than you would normally expect. Pitchers have 6.8. That adds up to 9.7. If they were to win only half their games, it would be 67.5. But if you add 9.8 to that you get 77.3. Very close to their actual win total of 76. They just perform better when it matters more.
Posted by Cyril Morong at 3:03 PM No comments:

The list is below. Only 17 players have dones this and the numbers are only through 2011. Jones still has a .304 lifetime AVG. AROD is down to .301. All 12 of the eligible players on this list are in the Hall of Fame. The non-eligibles are in red. To be on this list you need power, patience and the ability to hit for average. 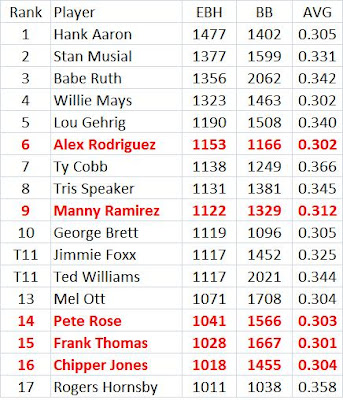