Each league had its second highest monthly OPS. The numbers for each league are in the table below. The NL's scoring was not that great but the AL had its best month. 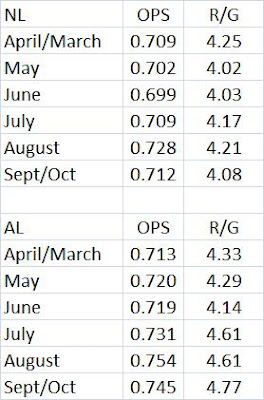 Posted by Cyril Morong at 7:09 PM No comments:

Did Branch Rickey Subscribe To The Same S**t As Billy Beane And Bill James?

I am reposting this entry from April 2010 since the Moneyball movie just came out.

Some sportswriters still like to make fun of the statheads or sabermetricians who never played the game and still live in their mom's basement. But to those writers I say "read the 1954 LIFE magazine article where Branch Rickey discusses some very modern looking formulas." This article is online and was called GOODBY TO SOME OLD BASEBALL IDEAS: The 'Brain' of the game unveils formula that statistically disproves cherished myths and demonstrates what really wins. Some of the new stats he proposed were "on-base average" and "isolated power." The article even shows many formulas, some of which are complex.

Rickey is in the Hall of Fame for his work as an executive. But he also played and managed. I think if you ridicule statheads, you would probably ridicule Rickey. Here is the introductory paragraph:

"Baseball people generally are allergic to new ideas. We are slow to change. For 51 years I have judged baseball by personal observation, by considered opinion and by accepted statistical methods. But recently I have come upon a device for measuring baseball which has compelled me to put different values on some of my oldest and most cherished theories. It reveals some new and startling truths about the nature of the game. It is a means of gauging with a high degree of accuracy important factors which contribute to winning and losing baseball games. It is most disconcerting and at the same time the most constructive thing to come into baseball in my memory."

That is followed by a fairly complex formula. Then Rickey asks "Can this bizarre mathematical device be put to any practical use?" And his answer? "It can indeed! It can be applied to any major league club for any season or part of a season to diagnose points of weakness and strength."

So Rickey, perhaps one of the most influential men ever invovled in baseball, saw the need for new and complex ways of analyzing the game. How can some writers, and some GMs, not see this today?

But what about intangibles? Rickey says:

"But somehow baseball's intangibles balance out. They reflect themselves in other ways. Over an entire season, or many seasons, individuals and teams build an accumulation of mathematical constants. A man can work with them. He can measure results and establish values. He can then construct a formula which expresses something tangible, and that is why this formula was devised."

After compiling many stats and data, what did Rickey do? "We took the figures to mathematicians at a famous research institute. Did they know baseball? No, but that was not essential."

Did RBIs' figure in Rickey's formula? No. "As a statistic, RBIs were not only misleading but dishonest."

There is much more to read in this article that is of interest. Near the end of the article he mentions getting his scouts involved in finding players with power, guys who will improve the ability of his team (the Pirates) to bring runners home. But that is based on the formula. Imagine that. Rickey was going to tell his scouts what to look for based on a formula.

If you have never read the article, I think you are in for a treat since it is so well written and it was written so long ago.
Posted by Cyril Morong at 3:07 PM No comments:

Has Mariano Rivera statistically separated himself from his peers?

That is the issue raised by an article in yesterday's NY Times Mr. Young, Mr. Ryan, Mr. Rivera Will Be Joining You By DAVE ANDERSON.

He compares Rivera to Cy Young and Nolan Ryan. Young won 511 games and the next highest is Walter Johnson at 417. Ryan struck out 5,714 batters, 839 more than Randy Johnson. Does Rivera dominate his peers in a similar way?

It is hard to argue against his 0.71 ERA in 139 post-season IP. I doubt any other closer can come close to that. Probably no other has had a chance to pitch so much in the playoffs. But the article offered no comparisons. No other pitcher's post-season performance was discussed.

Rivera now has 603 saves and the only other guy with 500+ saves is Trevor Hoffman with 601. So let's see how those two compare in their regular season stats (Hoffman only had 13 post-season IP). The table below summarizes some of their stats. 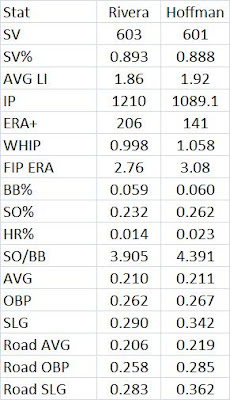 Their save percentages are almost identical. I thought that maybe Rivera got into tougher situations because he has such low HR% and his ERA is so much better than Hoffman's (2.22 vs. 2.87) that it seemed like maybe he came in when the score was closer. But they each have about the same average leverage index. The 1.92 for Hoffman, for example, indicates that his typical game had nearly twice the pressure as average in terms of inning and score.

So these two guys pitched a similar number of innings under the same pressure and were equally successful in what they were asked to do. Now maybe Rivera was in more pennant races or playoff chases but the Yankees usually made it in fairly easily. Maybe the competition was a little tougher in the AL.

ERA+ is adjusted for league average and park effects. Rivera's means that his ERA so adjusted is a little less than half the league average while Hoffman is about 30% lower. So big edge for Rivera (another closer, Billy Wagner, in about 900 IP had a 187, not too far from Rivera). Wagner had a career save % of 86%.

They are close in WHIP. FIP or fielding independent ERA takes walks, HBP, SO, and HR into account (with IBBs taken out). Hoffman is not too far off. This comes from Fangraphs and I don't think it is park adjusted. A rough estimate is that Hoffman's parks were about 7.2% better than average for pitchers while for Rivera just about average. If I raised Hoffman's FIP ERA by half of that 7.2% I get 3.19.

When I do walk% and SO/BB ratio, IBBs are taken out and HBP are in. IBBs are also taken out when doing HR%. This edge for Rivera seems very large. Maybe it is even bigger being a righty in Yankee Stadium and other teams would have tended to send lefties up to face him.

Rivera is not too far ahead of Hoffman in AVG and OBP allowed. But the edge in SLG seems big, probably due to the low HR%. The edge is even bigger in road games.

One other closer, Dennis Eckersley is worth looking at. I found his best 6 seasons in FIP ERA and the simple average of them was 2.13. For Rivera it was 2.15. If I park adjust Eckersley here, he goes up to 2.19. Still not too far from Rivera. But that has to be adjusted for the league average. Those years for Eck around 1987-93. It looks like the league average has been about .44 higher in those years than it was over Rivera's years. Rivera's FIP ERA is about .474 of the league average while for Eck it is .535. If Eck pitched in those years of Rivera he would get 2.42. Not too far off (also recall that for Rivera, those are his best six years and but I just used his entire career as an approximation). Eckersely came to the closer well after the age of 30 (and maybe before that we did not really have closers). Eckersley had a career save % of 85%.

What is probably the amazing thing is for how long Rivera has been consistently great. He is almost 42 and is having another outstanding season.

Update: David Pinto points out that Rivera had 116 "long saves" (4 outs or more) while Hoffman only had 55. I left a response.
Posted by Cyril Morong at 5:00 AM No comments:

Cage match. Who would win? I think Bill James would have the size advantage, but I really don't know for sure.

Anyway, Nobel prize winning physicist Richard Feynman said “Science is the belief in the ignorance of the experts.” If that is true, then I think Bill James must be a great scientist.

I thought of this watching "Moneyball" today. It was good to see them mention James and show his picture. It is very entertaining, enough so that, in my opinion, people with just a passing knowledge of baseball can enjoy it.

I don't have anything insightful to say about it. Joe Posnanski has written two great articles.

Moneyball and the Ballad of Bill James

Update 9-26: Art Howe isn’t happy about his portrayal in ‘Moneyball’

Click here to see all of the pitchers who won the triple crown at Baseball Almanac.

Only twice has a pitcher in both leagues won the pitching triple crown in the same year. 1918, Walter Johnson & Hippo Vaughn and 1924, Walter Johnson & Dazzy Vance.
Posted by Cyril Morong at 2:21 PM No comments:

Tom Ruane of Retrosheet looked into this after I asked him about it. Here is the link:

Best/Worst Month for a Team's Pitchers

Tom mentions "Since 1935, only the 1954 Orioles had a lower HRA rate than those 1969 Mets." Tom also looks at the best months in hits allowed and strikeouts.

Using the cumulative binomial distribution and assuming the following:

The Mets did allow 3 HRs in the last two days of the season in Oct. But by then they had clinched the division. They allowed no HRs from Aug. 30 to Sept. 18 in a total of 22 games (that is what a quick check of Retrosheet shows).

It seems like none of these HRs was significant. Only one even had a man on.

Report On Hitting So Far In September

The table below shows some basic stats for each month in both leagues. Hard to sum up September so far. The AL so far has had a big drop in OPS but runs per game is up. The NL is about the same as it was in August. 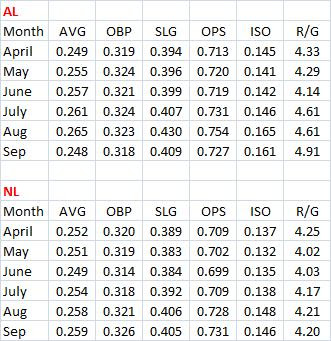 Posted by Cyril Morong at 3:24 PM No comments:

He now leads the AL in wins, strikeouts and ERA.


Posted by Cyril Morong at 9:54 AM No comments:

Hitting And Scoring Picked Up In August

The table below shows how each league has done, month-by-month, this year. April includes March data. Both leagues had their best power month measured by SLG and ISO. 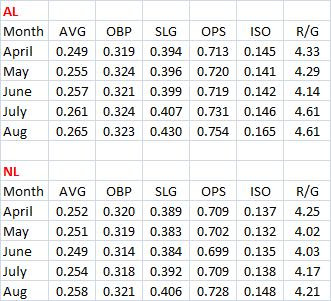