Dave Cameron addresses this over at Fangraphs. See Translating Stan Musial’s Numbers into 2012 Norms. He compares Musial's isolated power to his strikeout frequency and then converts them into numbers for the 2012 season. He looked specifically at Musial's 1943 season and also his entire career.

I did a study on this before and I divided a guy's relative HR rate by his relative K rate. Now that is not the same as ISO but my guess is that ISO and HR rate are highly correlated. The guy that really looks great in this analysis was DiMaggio

Here is the link

Which Players Had The Best HR-To-Strikeout Ratios?

Musial does well but not as well as some other big names. Now here is all of that post

I looked at every player with 5000+ PAs since 1920. I found their relative HRs and their relative strikeouts. Then found the ratio of the two. Ken Williams, for example, hit 3.70 times as many HRs as the average player of his time and league while striking out only 75% as often as the average player. Since his ratio of ratios (3.7/.75 = 4.93) is the highest of anyone in the study, he is ranked first. The data comes from the Lee Sinins Complete Baseball Encyclopedia. The table below shows the top 25: 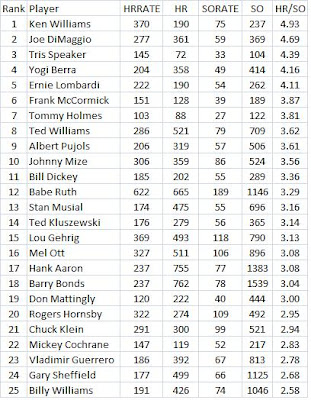 The next table shows which players had the lowest relative strikeout rates among guys who hit 40+ HRs. Again, no pikers here. In 2004, Bonds had only 41 strikeouts while the average player would have had 100. I am so proud to see the demonstration of Polish power with 3 for Ted Kluszewski and 1 for Carl Yastrzemski (whose 1970 season ranks 27th). Don't forget Stan Musial is 13th on the above list. 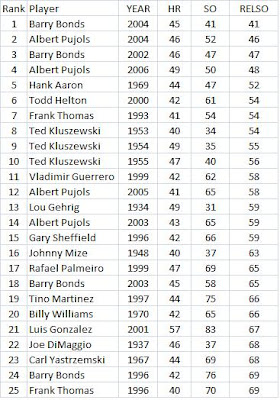 The league average in the above case was based on outs or how many outs each guy made. The next one is based on PAs (these are the choices you have using the Lee Sinins data base). So the guy that really stands out is Speaker and DiMaggio still beats Musial

Bagwell Is A Clear Hall Of Famer Unless He Used PEDs

He is 36th in career WAR among position players. He twice led the league and 2 other times was 5th. By my count there are 147 position players in the Hall who played in the majors (I am not counting Negro league players only because we don't have a WAR ranking for them).

This puts Bagwell in the to 25% of career value among the top 147. Maybe he will get in eventually, but his gain this year was slight.

Bagwell had 387 career Win Shares. Through 2001, that would have been tied for 56th among all players, including pitchers. Not sure where he would rank now, definitely still in the top 100.

I count 63 pitchers, so there are 210 players + pitchers. Bagwell clearly is above the bar by two different measures, WAR and Win Shares. I doubt both of these measures are so seriously flawed that he should not be in.

Is there some reason to keep waiting to see if proof of using PEDs is found? I don't think so.
Posted by Cyril Morong at 3:43 PM No comments:

Was Biggio Treated Differently Than Other Members Of The 3000 Hit Club?

How Does Piazza's Vote Percentage Compare To Other Great Catchers? 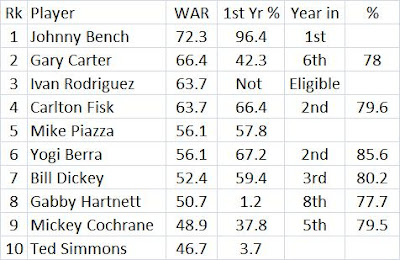 Carter actually fell to about 33% in his 2nd year and slowly rose to make it. So Piazza did better than Carter but not as well as Berra. Carter jumped to about 49 in his 3rd year and to 64 in his 4th year. He had 72.7 in year 5. We could look at Piazza's vote as pretty normal for a catcher. We don't have to say that he was necessarily affected by the steroids era.

The votes for Dickey, Hartnett and Cochrane are a little strange as the rules were in flux. Their vote histories from Baseball Reference are below. What I use for 1st year above is 6 years after their last year, which would be in line with today's rules, although Cochrane got no votes in that year (1943). As you can see below, he did get votes in 1942, so I used that above.

Did Good Hitters Behind Jim Rice Prevent Him From Being Intentionally Walked?

Probably not. This is a follow up on a post I did a few years ago. See Was Jim Rice A Feared Hitter?

Someone on Twitter suggested that he had good hitters behind him that kept him from being intentionally walked. But it seems like his IBBs were pretty low for a slugger like him.

One thing I should check is if Rice came up with a man on 1st more than average. That would tend to lower IBBs.

But here is a brief analysis. It looks like Rice's best years were 77-79 and 83. The numbers below show the AVG-OBP-SLG of how the slot behind him did on the Red Sox for those years. Then I show it for the league average in those years. I don't think the differences are that great.

Again, it does not look like Rice was followed by unusually good hitters compared to the league average.

Here are the numbers on the percentage of time Rice came up with a man on 1st (but not 1st only), then followed by the league averages.

So in two of these years, Rice was at the league average. That would not stop him from getting walked intentionally. The other years he did have a man blocking an IBB on 1st more than average. But again, in 1978 he had his best year, the guys behind him did not hit very well and he only had an average number of guys on 1st. Yet he had only 7 IBBs.

Now Baylor did bat 4th a good bit, too. So how did the 5th place hitters do? Some of that includes him. But if you take that out, they slugged .453. almost as good as Baylor. So again, IBBing him is no big gain.

28.5% of the time was there a man on 1st with Baylor up. That is less than Rice (30%) but not that much. With 1st base open, you will IBB a guy more. But gain the difference is not that great and with Rice you had a huge gain in SLG.

Larry Walker's All-Around Ability And His Hall Of Fame Worthiness

Last year I tried to quantify who the greatest "all-around" players were. I tried to take into account hitting for power, hitting for average, speed and defense (I so far have not broken down defense into catching and throwing).

I used various formulas and tried to have everything adjusted for the league average and park effects (where possible). Besides a simple score of "all-aroundness," I also tried to calculate one that was "above replacement." That allows longevity to play a role. Below are the three posts I did on this. The last one is the best attempt, I think.

In Part 3, Walker had the 87th best "all-around" score out of 913 players with 5000+ PAs through 2011. Above replacement, he is 96th. So he is around being in the top 10%. He did have alot of assists, so if I could break down defense into catching and throwing, he might do a bit better.

If you think being an "all-around player" matters, perhaps this would make you want to vote for Walker more. That might be a reasonable argument. Maybe the "all-around" players are more likely to excel no matter what the circumstances or playing conditions.

So here are the links

Who Was The Greatest "All-Around" Player Ever? Another Quantitative Attempt

Who Was The Greatest "All-Around" Player Ever? Another Quantitative Attempt (Part 2)

Who Was The Greatest "All-Around" Player Ever? Another Quantitative Attempt (Part 3)
Posted by Cyril Morong at 10:37 AM No comments:

Who was the youngest pitcher to ever win a game in major league baseball since 1900? Rogers Hornsby. Rogers Hornsby McKee, that is.

He was born in 1926 and named after the great 2B man. He pitched a few games during WWII and played in the minors for several years after that, although not as a pitcher since he hurt his arm. He is still alive. He hit 33 HRs one year and batted .357 for Baton Rouge in 1953. Here are links to some articles about him:

A career in a moment by Scott Fowler of the The Charlotte Observer. On thing it says is that in 2009 the Phillies "paid for McKee and his entire family to come to Philadelphia for alumni night and honored him on their field."

eBay Item of the Day: Named for Greatness by Jim Baker, featuring a picture autographed by McKee. Jim has lots of info about the game he won.

A short biography at Baseball Reference

Where Are They Now: Rogers McKee by Larry Shenk, writing for the Phillies link at MLB.com.

A baseball star -- for one day from Scott Fowler's blog.
Posted by Cyril Morong at 9:58 AM No comments:

Click here to read it.
Posted by Cyril Morong at 3:16 PM No comments: