Also impressive is their team isolated power (ISO) of .227. ISO is slugging percentage (SLG) minus batting average (AVG). It is a better measure of power than SLG since it is extra bases per AB. The Blue Jays have a .471 SLG and a .244 AVG. That gives them a .227 ISO. If they finished the season with that mark, it would also be an all-time record.

The table below shows the top ten in team ISO in AL & NL history. The Blue Jays are way ahead of the record right now. Just imagine how many runs they would be scoring if their team on-base percentage was not 20 points below the league average (.310 vs. .330). They are second in runs with 271. 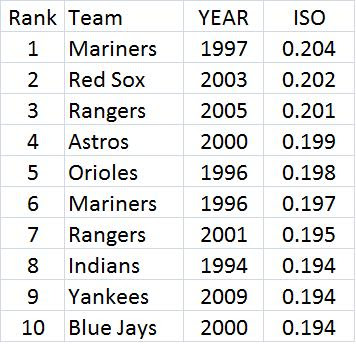 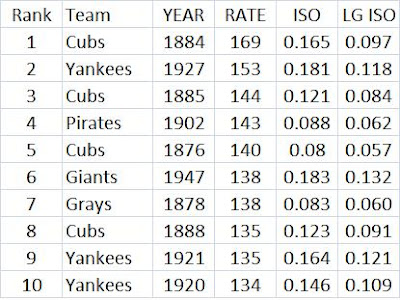 In 1884, balls hit over a fence of the Cubs park that was only about 200 feet away were called HRs instead of doubles as they were in other years. So Ned Williamson hit 27 HRs that year. I think some other Cubs hit over 20.

The next table shows only the top ten since 1900. 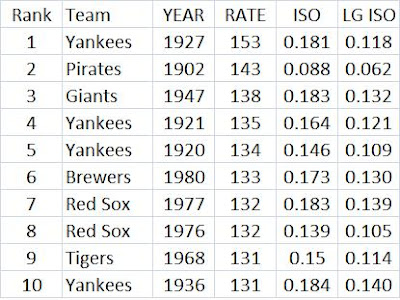 On May 23 I reported that their OPS relative to the league average was just 81.

Now their OPS is .605 while the league OPS is .731. The ratio is now .8276. Multiplying that by 100 and rounding gives them a relative OPS now of 83. That would still be the lowest ever in either the AL or NL. See the May 23 post Astros Offense On Record Setting Low Pace which shows the worst 10 teams in both AL and NL history.

The Astros now have an OPS+ of 62. See this Baseball Reference link. The lowest team OPS+ I found going all the way back to 1920 was 69 for the 1920 Philadelphia A's. The next lowest so far this year in either league is Pittsburgh with 80.
Posted by Cyril Morong at 10:48 AM No comments:

How Important Was Team OPS Differential In The 1920s?

I took the data from Retrosheet. The regression equation was

The equation predicts the 1927 Yanks to have a pct of .769, far higher than their actual .714. Could they have been even better than we thought?

I also found the simple average of every team's yearly differential and pct and then ran another regression. Here was the equation:

In this case there were only 16 observations. The r-squared was .969 and the standard error was .012 or about 1.87 wins per 154 games. The better r-squared and standard error are probably due to averaging each team's yearly results. That helps flush out some of the randomness.

I did this same analysis a few years ago on the 1989-2002 seasons (using only walks, hits and ABs to calculate OBP). For all 394 teams, the equation was

But when I averaged each team, the equation was

The 1920s team that exceeded their predicted pct using the averaging method the most was the Senators. Their average OPSDIFF was -.0036 which projects to about a .495 pct while it was actually about .519. So they were about .024 better than predicted. The Senators did have one of the early relief specialists for most of the decade, Firpo Marberry.

The next best over achievers were the Cubs who had a pct of .526 while they were predicted to have a .507. So they were .019 better than expected.
Posted by Cyril Morong at 11:17 AM No comments:

But now their OPS is down to .590 while the league OPS is .733. The ratio is now .8049, just a little lower than a week ago. Last week's post Astros Offense On Record Setting Low Pace shows the worst 10 teams in both AL and NL history.

1939 Yankees, Not 1927 Yankees Had The Biggest Run Differential Ever

In discussing how well the Rays are doing this year with their +95 run differential, ESPN's Tim Kurkjian said that they probably will not break the season record held by the 1927 Yankees of 371 (actually they had 376). But the 1939 Yankees had a run differential of 411. That is the record. They scored 967 while allowing 556.

As I pointed out a couple of weeks ago with Explaining The Rays Fast Start, the Rays are probably doing so well due to their performance with runners on base. Their overall OPS differential is only .084. Their hitters have a .737 OPS while their pitchers have allowed a .653 OPS. Based on an old regression I ran, the equation was 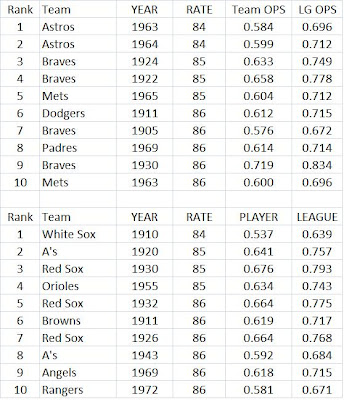 What You Don't Know About The 1927 Yankees

Well, you may know some of this. And even if you don't, some of it won't be a surprise. But this was fun to put together. For one, they out homered their opponents 158-42, for a differential of 116, the highest ever (the 1961 Yankees are 2nd with 103 and the 2005 Rangers are the only other team with 100 or more at 101). As you will see below, it is also the highest HR differential per game by a wide margin. 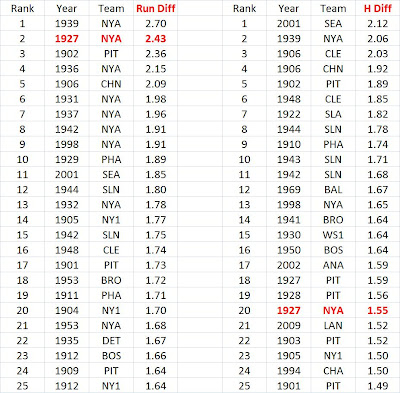 Pretty good. Second in run differential and 20th in hit differential. The team called NY1 is the New York Giants. 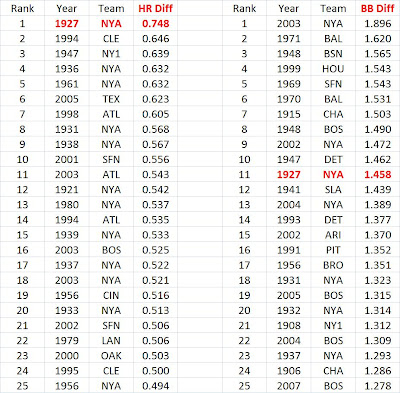 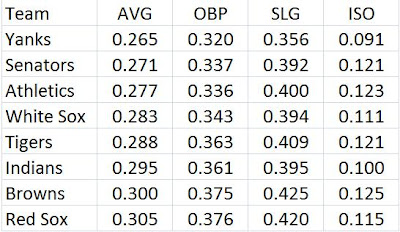 The next table shows some other stats allowed by the Yankees. They allowed the fewest walks, the second fewest HRs, had the second highest strikeout-to-walk ratio, by far the fewest HBP and had the best defensive efficiency ratio (the percentage of batted balls turned into outs). 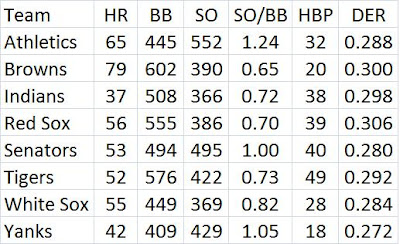 They also allowed only 177 sacrifice hits, the lowest in the league (the rest of the league averaged allowing 210). I guess with all the leads they must have had, other teams did not like to sacrifice.

The 1927 Yankees struckout 610 times to lead the league. The next highest team total was 476. The Yankee pitchers only struckout 431 batters. So they struck out 179 times more than their opponents.

Last year I had a post called Were The 1922 St. Louis Browns The 14th Best Team Since 1920?. I used a regression equation to predict team winning pct. It was

I also have a regression equation based on OPS differential (looking at teams from 1989-2002). It is

Sources: Retrosheet and the Sean Lahman Database
Posted by Cyril Morong at 8:08 AM No comments: