Which teams have the best OPS differentials so far in 2008?

Since the season is about one-third over (teams have played 54 games or close to that number), it might be a good time to look at this.

Where OPSDIFF is OPS differential, a team's hitting OPS minus the OPS it's pitchers allow. OPS is on-base percentage plus slugging percentage. You can read that earlier study here.

In the graphs below, teams in each league are ranked by OPS differential. The next column shows each team's actual winning percentage followed by their pct predicted by the equation. Then their actual wins, predicted wins and the difference.

The Angels have a -.030 OPPSDIFF but have a .571 winning pct. Maybe they have been lucky so far this year. But check out the Astros. They have a -.060 differential yet have a winning record! Then there are the Twins who have a winning record with a -.069 OPPSDIFF. So far, the Cubs and Red Sox are the strongest teams in their respective leagues. The Braves are very strong, too, but their record so far does not show it. 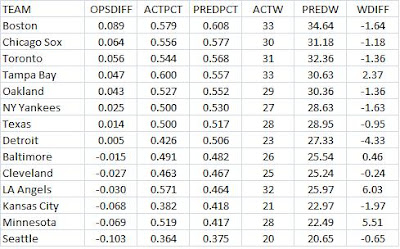 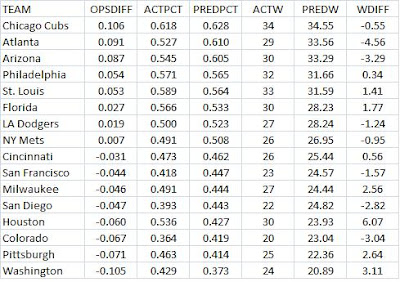 Posted by Cyril Morong at 7:44 AM No comments:

Another look at salaries and wins 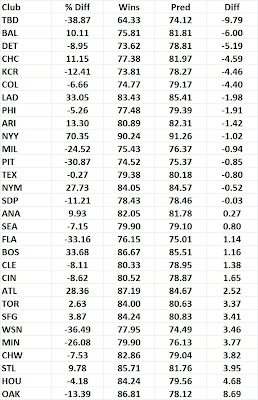 The pitchers who had 35 or fewer starts (Webb's career high) that won 25+ games averaged 274 IP, well above Webb's career high of 236. This group of pitchers also averaged 37 games pitched, so they had 2.5 relief appearances on average, which could help them win an extra game or two (that group of 6 pitchers averaged 34.5 starts). Webb has only pitched 1 game in relief in his entire career.

If he were to get the decision in 82.3% of his starts (his % from last year) the rest of the way (26 starts) and if he had a .767 winning percentage in those games, he wins 16.4 games. Added to the 9 he already has, he gets to 25. So he needs to keep pitching as well as he has this year and the Diamondbacks need to keep scoring 5.4 runs per game.
Posted by Cyril Morong at 1:53 PM No comments:

Berkman is on a hot streak, but Cecil Cooper had a few good ones, too

Berkman, of course, is on a great streak. He is batting .641 in May with a 1.205 SLG. You can click here to see his May stats. So Astro manager, Cecil Cooper, who was a pretty good major league hitter (he batted .352 one year) said:

"I was never in a streak like that. Never, ever."

I got all these stats using Retrosheet.
Posted by Cyril Morong at 5:22 PM No comments: