Click here to see their rank for position players.

The only players to ever have a better season were

Per game (he played in 139 and in one game he was just a pinch runner), he had .0770 WAR. That would be 9th best ever. See Mike Trout's WAR Per Game Is Historically One Of The Best (So Far).

He also had, not surpringly, the best rookie season ever. See Does Mike Trout Already Have One Of The Top Ten Rookie Seasons Ever?

To see the top seasons ever in WAR from Fangraphs, go to Best WAR Seasons For Position Players-Fangraphs. (thanks to David Appelman) They give Trout 10.0 and that is tied for 83rd best every. But, recall he only played 139 games. The average games played for the top 30 is 150. If Trout had played that many and had racked up the same rate of WAR per game, he would have had 10.8, good enough for 43rd.
Posted by Cyril Morong at 4:17 PM No comments:

How Surprising Was Zito's Performance?

He did have 4 starts this year with a game score of 72 or higher. But those were generally against below average hitting teams.

(according to Baseball Reference, the NL league average OPS+ was 94, not 100 for some reason).

Now in his career it is .705 vs. righties and .701 vs. lefties, so maybe righties don't especially bother him. But this year he gave up 1 HR per 9 IP, which was the league average. His SO/BB ratio was 1.63, far below the league average of 2.50. I doubt anyone could have expected his performance last night. He is hardly an ace or stopper.

The average game score by a lefty during the regular season against the Cards was 45.8. The highest by a lefty in Busch was 60 (Bumgarner). So Zito was well above both of those.

In the Division series, Gio Gonzalez had 55 and 46. I don't think the Nats had any other lefty starters. Bumgarner had 22 in game 1. I think that is all the lefty starts agains the Cards in the playoffs besides Zito. Did I miss any?

But Marlins Park was not a good HR park this year. 113 HRs were hit there (by both teams) while 157 were hit in Marlin road games. So there were only 72% as many road HRs as at home. It is only one year, but that is a low HR park factor. 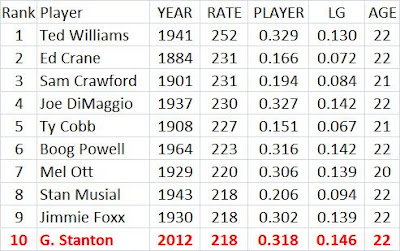 The rest of the top 15 include Bob Horner, Mel Ott, Jimmy Sheckard, Juan Gonzalez and Joe Jackson. So Stanton is in great company.

Stanton is one of just 3 guys to have an ISO of at least .275 in 2 different seasons at age 22 or younger. The next table shows all those seasons. 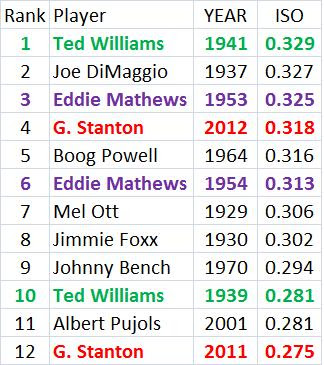 Other players with season of .250 or higher were Alex Rodriguez, Juan Gonzalez, Hal Trosky, Frank Robinson, Vladimir Guerrero, Bob Horner, Evan Longoria, Darryl Strawberry. Jimmie Foxx, Mel Ott, Joe DiMaggio and Ted Williams each had one more .250+ season to go along with those seen in the table.

Pujols Had Worst September Ever 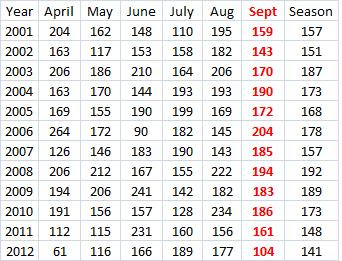 At 104, his OPS+ is far below the next lowest ever for Sept (actually Sept/Oct). The next lowest was 143. It also looks like his 3rd lowest monthly OPS+ ever no matter what the month. In 8 of his 11 previous seasons, his Sept OPS+ was higher than what it was for the whole season. His worst differential had been -17 in 2003. Yet this year it was -37. So his Sept performance was very much out of character. Maybe a normal performance would not have helped the Angels as they finished 4 games out of the wild card.
Posted by Cyril Morong at 6:31 PM 2 comments:

Trout Vs. Cabrerra: A Conventional Approach

Cabrerra beat Trout in AVG, .330-.326. If Trout had just 3 more hits, he bats .331. I think everyone agrees that Trout was a much better fielder. He probably took away at least 3 more hits than Cabrerra.

Cabrerra led the league in RBIs but Trout led in runs. That has to count for something. Trout was 20 ahead of Cabrerra here (yes, Cabrerra beats Trout 139-83 in RBIs)

Cabrerra grounded into 28 DPs to lead the league. His RBI/GDP ratio was 4.96. Trout grounded into just 7 DPs. His ratio was 11.86. When you calculate value, you have to count the good with the bad. Cabrerra's RBIs were costly in terms of GDPs. Not so for Trout. Even by the conventional stats, Trout looks pretty good.
Posted by Cyril Morong at 11:36 AM No comments:

Trout Leads League In OPS+ And SBs And Runs

Sort of a triple crown. I found only 5 other players since 1901 who led the league in OPS+ and SBs in the same season

Some of them did it more than once. They all had at least one of those years as the runs scored leader, too. Stirnweiss did it in a war year, 1945. Don't forget that Trout had only 5 CS to go along with his 49 SBs. Probably the best % of any of these guys (although these days the league average is high so I should look into doing it relative to the league average).

I searched this by realizing that 15 SBs was the lowest league leading total and 144 was the lowest OPS+ leader. Then I had the Baseball Reference Play Index call up all the guys who had those numbers as a minimum. There were 383 cases and I scanned for bold black on SBs for the leaders and found these guys.

Vladimir Guerrero was the first in 2001-2002. Barry Bonds had 3 such seasons and he is the only other guy to do it more than once.
Posted by Cyril Morong at 6:26 PM No comments: