Do The Best Hitters Strikeout More Than Other Hitters (And Has This Changed Over Time)? 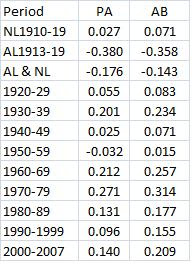 There seems to be quite a bit of fluctuation over time. I don't think I have any good reasons why. Most of the time the correlation is positive, meaning that the better hitters usually strikeout more that average. I am surprised that the correlations have come down since 1980 and that they are not as high today as they were in the 1960s and 1970s. This is because we have guys like Ryan Howard and Adam Dunn around.

It is also interesting that the 1930s were much higher than the periods right before and after. Same for the 1960s and 1970s. The table below shows the top ten batters in OWP for the 1930s and their strikeout rates. 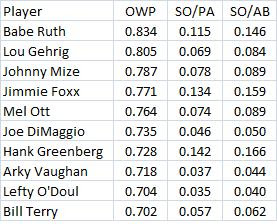 The next table shows the top ten in strikeouts per AB from the 1930s. The simple average of the OWP of these players was .631. Ruth was over .800 and Foxx and Greenberg were over .700 and three others were over .600. 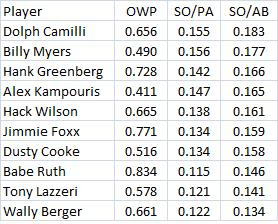 Generally I found that when batters cut down their strikeout rates from year to year, they hit better. But I also found the effect was slight. Here is an exerpt:

This means that if a player cut his strikeouts down by 100, his hits would go up by 27.4. That is like saying on his additional ABs when he does not strikeout, he bats .274. This may not be impressive because for all of these players over the 2002-3 seasons, they already bat about .336 when they don't strikeout. Also, the r-squared was only .068, meaning that the regression explains only about 6.8% of the variation in AVGChange. So if there is any negative side to striking out, it is probably not too large."

Maybe this makes sense. If you swing harder, you strike out more. But a harder swing means the ball is hit harder, which should mean more hits. So combined with the earlier study, a player should be careful if he thinks he should make a big effort to strikeout less.
Posted by Cyril Morong at 12:15 PM 3 comments:

Which Players Had The Most Uncharacteristically Good Seasons? (adjusted for their age)

I did this last week but did not adjust for age. The key stat I used is offensive winning percentage, so read last week's post to understand it. The idea is to find out which player had a season that deviated the most from his norm or career average. But I did not take age into account. Player performance improves, then peaks, then declines. The typical peak may be as young as 25. So a player doing 100 points better than his norm at age 25 is not the same as doing 100 points better at age 38. To find the expected performance at a given age, I found the relationship between age and average OWP at each age using all players with 15+ seasons of 400+ PAs. That relationship is

This comes from regression analysis which had an r-squared of .95, meaning that 95% of the variation in an age's average OWP is explained by the equation. The standard error was .008 or pretty low. But as Bill James, Phil Birnbaum and probably many others have pointed out, averaging each player's OWP at a given age to predict career trends can have many problems. One is that as we get to older ages, there are not many players to use to get an average because so many players are not good enough to even play anymore. If those retired guys had kept playing, the average OWP for ages 39, 40, etc. would be much lower. So this equation will underestimate how unusual some seasons might have been for older players.

Posted by Cyril Morong at 4:01 PM No comments:

Which Players Had The Most Uncharacteristically Good Seasons?

Many fans know that Norm Cash batted .361 in 1961. He also had 41 HRs and 132 RBIs. Never batted .300 again (his last year was 1974) nor did he ever reach 40 HRs or 100 RBIs. Perhaps this is the most atypically good season ever. He clearly performed well above what ended up as being his career norms (was it the corked bat mentioned in the ESPN almanac? I recall that physicist Robert Adair said a corked would not really help).

Anyway, to study this, I looked at all players with 10+ seasons with 400+ PAs through 2005 (there were 504 players). I found the simple mean of their yearly offensive winning percentage or OWP (a Bill James stat that says what a team's winning percentage would be if all 9 batters were identical and you gave up an average number of runs). Since I used data from the Lee Sinins complete baseball encyclopedia, OWP is also park adjusted. Then I subtracted that mean from their best year. The following table shows the top 25 in terms of best minus average OWP. Cash's 1961 season was 25th. Another table follows that only looks at seasons since 1920. 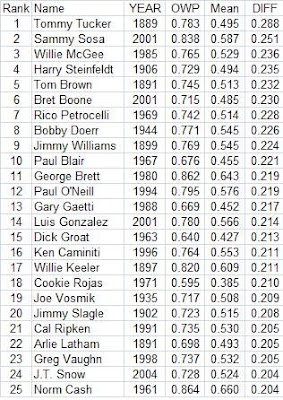 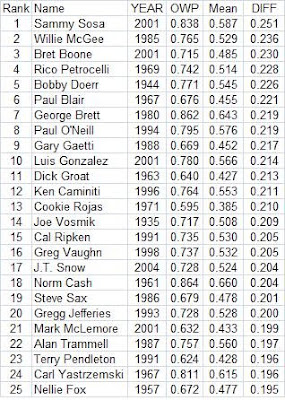 Posted by Cyril Morong at 4:29 PM No comments: