I am putting several posts on this topic together. The first is the original post. Then I did two more later, finding some more cases by using a different criteria for league leader in SB%. The added cases are Hank Aaron, Joe Morgan and Mike Trout.

Suppose that we looked for league leaders in stats that might represent three different skills:

Getting on base (OBP, times on base)

What players have led their league in at least one stat from each category? Looking over league leaders lists, I came up with 11 different players who have done it at least once. I list them, showing the year or years they did it, which stats they did it in and the amount or rate for each one. Stats from Baseball Reference and the Lee Sinins Complete Baseball Encyclopedia. SB% starts with 1951 at Baseball Reference.

If you can think of any other player who might qualify, please let me know. 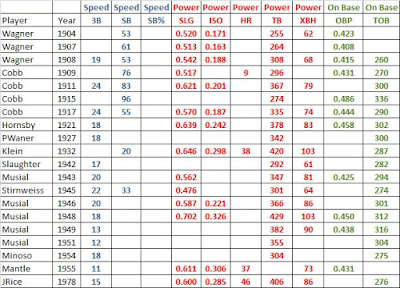 Trout led the league in OBP with .460. Here are the top 5 qualified batters in the AL in ISO

Here are all the AL players with 20+ SBs this year. Baseball Reference has a minimum number of SB attempts of .1 per team game to qualify for the league lead in SB%. So if a player has 16 attempts, he qualifies. But The ESPN Baseball Encyclopedia, Fifth Edition by Gary Gillette and Pete Palmer has 20 SBs as the minimum. Baseball Reference shows Jackie Bradley as the leader with 94.44% (17-1).

Recently I searched for leaders in XBT% who might qualify. XBT% is the percentage of times a runner advanced more than one base on a single or more than two bases on a double. Baseball Reference has this back to 1916. Here are the three new players I found:

Also, Ty Cobb (1917) and Chuck Klein (1932), who already had "triple threat" triple crowns, also led their leagues in XBT% in addition to their other speed stats their years.

I sorted by XBT% and then looked for the first guy listed who had at least 3.1 PAs per game (that might not be the best way to do it since that is not a measure of base running opportunities but it was easy and it does limit it to full-time players).

Posted by Cyril Morong at 6:56 PM No comments:

Did Mike Yastrzemski have the best "old" rookie season since the 1930s last year?

I had Stathead (a Baseball Reference product) call up all the rookies since 1900 aged 27+ with 400+ PAs. The table below shows the leaders in OPS+. Since the 1930s, the only players ahead of him are Jose Abreu, Ichiro Suzuki and Guy Curtright. Abreu and Suzuki are not traditional rookies and Curtright was in a war year.

Posted by Cyril Morong at 6:59 PM No comments: