In 1968, there were three active Triple Crown winners. That is the last year there were that many. I suggested this idea to Jason K. Woodburn, who has a Twitter account called "Custom Cards OTD in Baseball" (@custom_baseball). He created this card.

Topps often had cards like this that featured two or three big stars photographed together. Unfortunately, Topps did not have such a card in 1968, although they could have because Yastrzemski won the Triple Crown in 1967, Frank Robinson did it in 1966 and Mantle in 1956. All three were active in 1968 (then Mantle retired the next year, not playing in 1969). Maybe there was never a time when all three were at the same place. 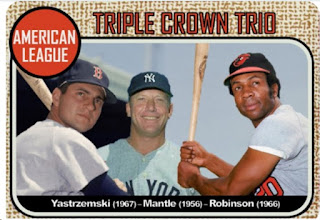 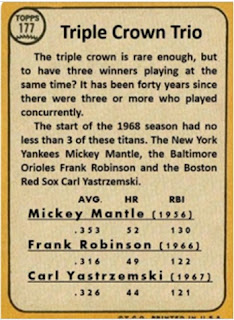 Posted by Cyril Morong at 11:53 AM No comments:

The bar chart below illustrates their GB for each season. 1922 is a cabin in a sea of skyscrapers.

Posted by Cyril Morong at 3:30 PM No comments: