To see what I have already done, Part 5. It has links to the earlier parts. Generally, I don't think I am finding any unusual improvement in his performance at older ages. Yes, he has had some very good seasons when he was older, but in relation to his performance at younger ages or even immediately preceding seasons, I don't think there is anything unprecedented going on. In some cases I took park effects and league averages into account. Sometimes I also relied only on pitcher determined stats like strikeouts, walks and HRs.

So Clemens does not appear to have found some unprecedented fountain of youth in his late 30s. I know I did not take park effects into account here or pitcher determined stats or number of IP. But Clemens is so far down on these rankings that it is very unlikely that bringing these things in would show something unusual. Clemens did have some great years after age 39, but I dealt with that in the first part of this series. I think this will be the last part of it and next weekend I will probably have something on a different topic.
Posted by Cyril Morong at 1:21 PM No comments:

To see what I have already done, Part 4. It has links to the earlier parts. This time I found all the pitcher seasons from ages 33-44 with 100+ IP (except age 44, I dropped it down to 99 to keep Clemens in the mix). Then I looked at how much they improved going from age 33 to 34, 34 to 35, etc., all the way up to 44. The 3 stats they were ranked on were RSAA per 9 IP, strikeout-to-walk ratio relative to the league average and wins above replacement level. These stats are explained in the earlier parts. Then I calculated how much each pitcher changed as he aged 1 year. Then I ranked the pitchers from best to worst change. The top ranked pitcher got 20 points (meaning he improved more in that stat than any other pitcher as he aged 1 year), the 2nd got 19, the 3rd got 18 and so on. Then I added up all the points each pitcher got for all the one year changes. Here are the leaders in each stat. First is RSAA per 9 IP

Recall that Clemens age 44 was included even though he had only 99 IP. All other 44 years olds had well over 100. Clemens had the 3rd best improvement. That gave him 18 points. Take that away, and he falls into a tie with Cy Young. But his performance here is still pretty good. Clemens was in the top 20 six times for improvement.

Clemens is only 5th here and this stat is controlled by the pitcher, whereas runs are also affected by the fielders. Also, Clemens got 17 points here for age 44. Take that away and his point total drops to 41 and he ranks 10th at best.

Now for wins above replacement level.

UPDATE Feb. 25: The graph below shows strikeouts per 9 IP relative to the league average. Notice that age 35 is not his best year. He had two years at much younger ages that were better. Then there is another graph that shows Cy Young. 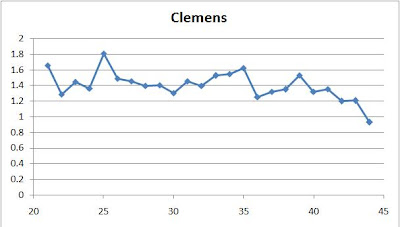 Now the graph for Young, same stat. He has some spikes late in his career. So somehow he became a much better strikeout pitcher in his later years. He did switch to the AL in 1901 at age 34 (his career best ratio of 1.49) and maybe the AL was inferior to the NL, so that was the reason for the improvement. But he was already trending upward and he had what was his second best season (up to that time) at age 33 (a ratio of 1.31) nearly as good as his best ratio of 1.32 at age 29 and alot better than anything before age 29. But he also was trending down then had another spike up at age 38 (1.40) which was much better than what he had at age 36 (1.20) or 37 (1.16). 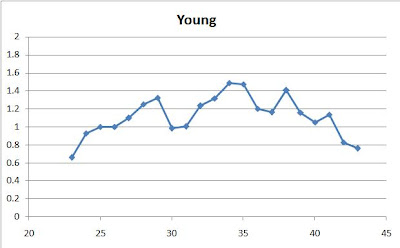 To see what I have already done, click on Part 1 and Part 2 and Part 3. So far, I have not found that in his late thirties or early 40s that Clemens had an unprecedented improvement. Early 40s was good, but not the best. Late 30s was not good, with many pitchers doing better than he did. I have looked at many stats, sometimes adjusting for park effects and league averages. Pitchers that show more improvement than Clemens include Nolan Ryan and Dennis Martinez.

In this post, I simply show that both Ted Lyons and Cy Young also either showed significant improvement late in their careers or did unusually well. In the graphs below (the last thing), the pink line is strikeout-to-walk ratio (not adjusted for the league average. The blue line is ERA+ (from Baseball Reference). It adjusts ERA for the league average and park effects. A 120 means the pitcher is 20% better than average. But I divided the ERA+'s for each guy by 100 to fit in the graph. So 120 would become1.20.

Then there is Ted Lyons. Here are his ERA+’s from age 32 on

He pitched 180 innings at age 41 in 1942. Even in 1942, most of the good hitters had still not joined the military (Williams and DiMaggio, for example were still there). Lyons had a career ERA+ of 118. So in his late 30s and early 40s, he was generally pitching well above his career average. My point is that late career improvements are not totally unheard of (although not common). Notice his strikeout-to-walk ratio more than doubled late in his career. I am not sure what Clemens has done in terms of an unusual age profile is much different than Lyons or Young. Now the graphs. Age is on the horizontal axis and strikeout-to-walk ratio & ERA+ are on the vertical. 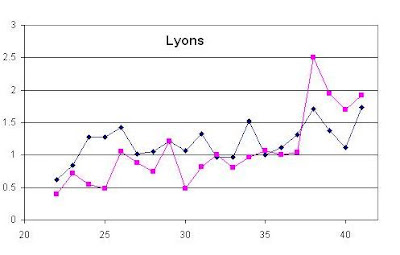 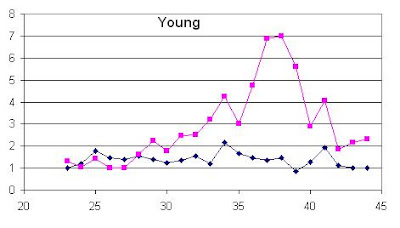 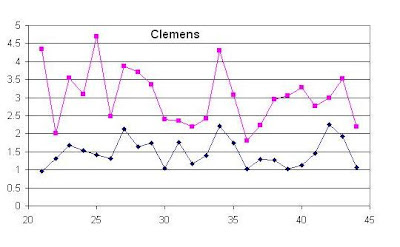 To see what I have already done, click on Part 1 and Part 2. I looked at how well Clemens did from ages 40-44 compared to how he did from 35-39.So far, I don't think I have found anything so unusual that it raises suspicions. 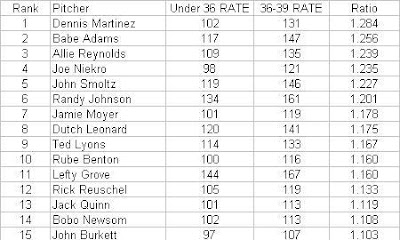 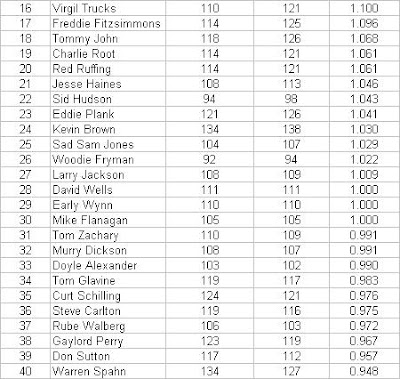 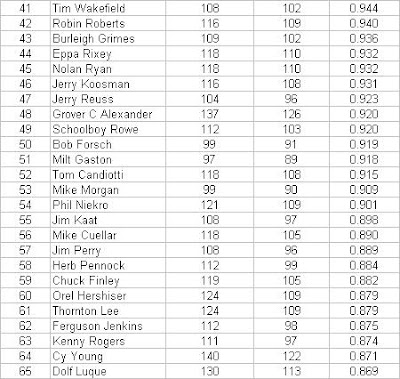 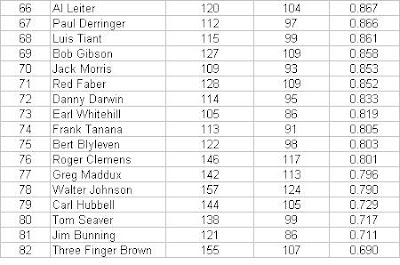 Posted by Cyril Morong at 9:08 AM No comments:

Last week (which you can probably see below), I did part 1. This week, I tried to put a win value on the change in performance for pitchers as they aged. I looked at all pitchers who had 500+ IP from ages 35-39 and 200+ IP from ages 40-44. One stat I looked at was RSAA (from the Lee Sinins Sabermetric Encyclopedia). It tells us how many fewer runs a pitcher gave up than the league average pitcher, adjusted for park effects. There were 53 such pitchers. Last week I looked at how these pitchers changed as they aged based their runs allowed per 9 IP, assuming a league average of 4 runs per game.

The first thing I did this week was to look at how many games above the replacement level pitcher each guy was when he was younger and then when he was older. This involved calculating how many wins he would have using the Bill James pythagorean formula then subtracting from that the number of games a replacement would have won in the same number of IP (with games equalling IP/9 and the replacement percentage being .400). The leaders are below. Nolan Ryan is first. He was 6.66 more wins above replacement in the older years than in the younger years. Clemens does well at third place, but a good bit behind Ryan. 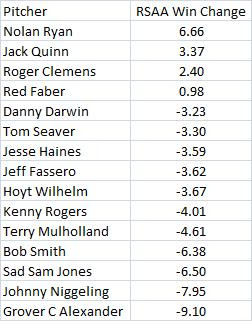 One weakness in using RSAA is that fielders play a role in how many runs a pitcher allows. So the next thing I did was to calculate an ERA relative to the league average for each pitcher (at both the young and old ages) based on their HRs allowed, walks allowed and strikeouts allowed (relative to the league average). The formula I used comes from linear regression analysis of all pitchers since 1920 with 2000+ IP 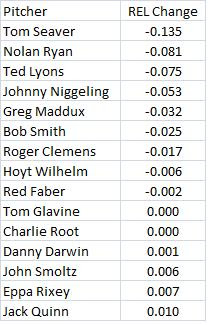 The last table does what the first table did but using the relative ERA from the above formula instead of using runs allowed per 9 IP based on RSAA. Ryan improved his value over the replacement pitcher by 5.77 wins. Clemens is up there, but he still lost 3 wins in value. Although this method takes the fielders out of the picture, it is not adjusted for park effects. 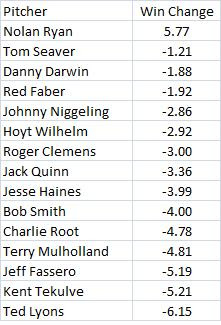 How Well Has Roger Clemens Aged?

You might wonder if a guy who is able to maintain or improve his performance as he aged had a little help from steroids or some other chemical enhancer. You probabaly heard about Roger Clemens' agent writing a report to refute claims that he took steroids. JC Bradbury took a look at this and you can read what he had to say with What Do the Statistics Say about Roger Clemens’s Steroid Use?. The report by Clemens' agent can be read by clicking here. What I do here is to see how Clemens did from age 40-44 compared to how he did from 35-39 and then compare that to the performance changes of other pitchers over the same ages. All the data comes from the Lee Sinins Sabermetric Encyclopedia. I found the 53 pitchers who had at least 500 IP from 35-39 and 200+ IP from 40-44. In general, Clemens does much better at the older age. But he is not always first or close to first in the rankings of the various stats. (click here for part 2 of this study.)

I also wrote a couple of articles called "Did Roger Clemens Have the Best Age-Adjusted Season Ever in 2005?" (parts 1 and 2) a couple of years ago. You can read them here and here.

First, let's see who the best pitchers were past the age of 39. The following table shows the top 15 pitchers with 200+ IP. The 161 for Wilhelm means that he was 61% better than the average pitcher in ERA. Clemens is near the top. Wilhelm was a knuckleballer. Smoltz does not have that many IP. Lyons and Hevving were old during WW II. So Clemens really stands out. 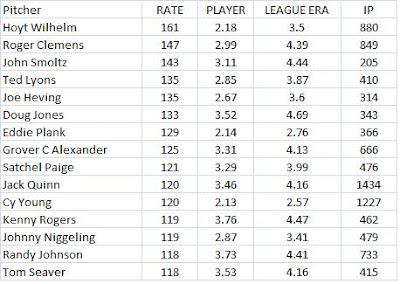 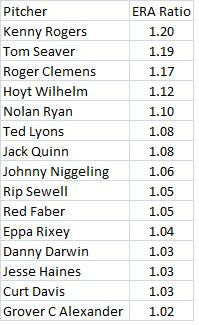 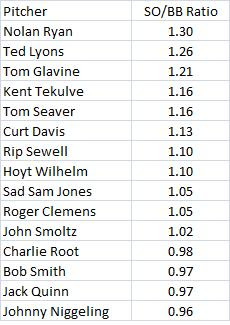 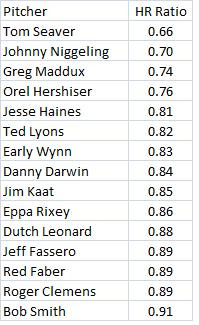 The next table shows how many runs per 9 IP each pitcher gave up in the older years relative to his younger years. For this, I used a stat from the Lee Sinins Sabermetric Encyclopedia called RSAA which shows how many fewer runs a guy allowed than the average pitcher while adjusting for park effects. I first adjusted each guy to a league with 4 runs per 9 IP. Clemens has 3.10 runs per 9 IP at the younger age and 2.63 at the older age. Since 2.63/3.10 = .85, Clemens only gave up 85% as many runs at the older age than he did at the younger age. 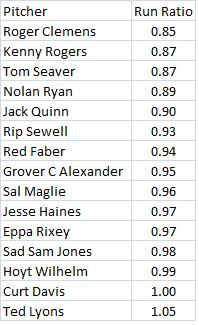 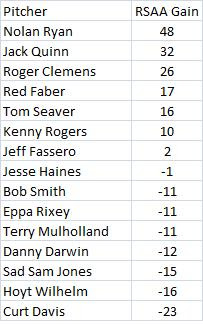 The last table just shows the leaders in terms of change in IP. Ryan was actually the only one to pitch more innings. There may be others who did, but they don't meet the qualifications I set out at the beginning. 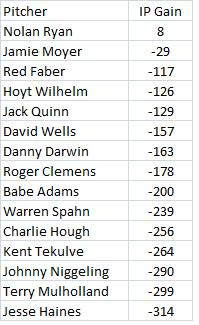