Pitchers Who Were Good At Preventing Homeruns And Not Walking Batters

The ranking can be seen here Pitcher’s Homerun/Walk Rating. In the Bill James Goldmine book he has a section on ranking pitchers just on HRs and walks. I did something like that once. Here is the basic idea:

HR*BB is just the previous 2 multiplied by each other. Greg Maddux ranks very high. Only Rixey is ahead of him. But he pitched almost all of his post 1920 time with the Reds (1920 with Philadelphia and 1921-33 with the Reds). Their park was extremely difficult to hit HRs in. From 1920-29, it allowed only 22% as many HRs as the average park in the NL! (that is according to the STATS, INC. All-Time BASEBALL SOURCEBOOK) That helps explain why Rixey does so well. The only other pitcher besides Maddux to have a score of 1.50 or more for both HRs and BBs is Pete Donohue. But Donohue also spent almost all of his career (which lasted from 1921-32) with the Reds. So, for all practical purposes, Maddux is the only pitcher to best the league average by at least 50% in both HRs and BBs! I think it is amazing that a guy who put the ball in the strike zone so much would give up so few HRs.

Last week I found the all-time leaders in HRs per time making contact. This week I look at the overall rate in MLB since 1955 for non-pitchers only. Times making contact is AB - K + SF. The first graph below shows this rate. Then then next one shows HRs per AB (HR%) and then the next one shows HRs per plate appearance with PA = AB + non-intentional walks + SF + HBP. The last graph shows strikeouts per AB. I don't show strikeouts per PA since that mimics strikeouts per AB very well.

Why would the HR per contact rate rise more than the either of the other two rates in both absolute and relative terms? One thing comes to mind is that players are swinging more for HRs, which would raise their K total but that hard swinging would lead to more HRs when they do make contact. Maybe it was steroids or smaller parks or a livelier ball, but those would raise the HR per AB rate, too but why would those things raise the HR per contact rate even more? 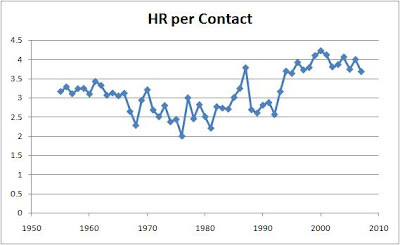 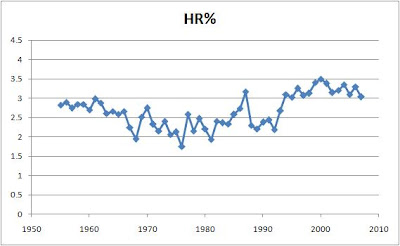 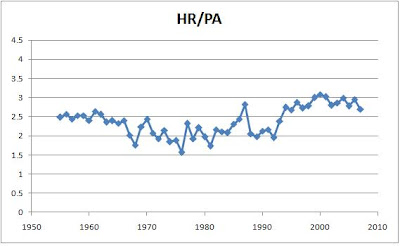 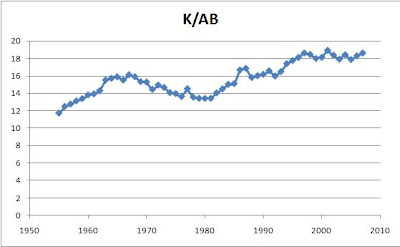 Posted by Cyril Morong at 7:07 PM No comments:

I found the top HR hitters by dividing their HRs by the times they made contact (that is, at-bats minus strikeouts). They may have made contact a few other times with sacrifice flies and sacrifice hits, but SFs have not always been kept separate from sacrifice bunts. The players included everyone who had 4,100+ plate appearances from 1920-2007. My source was the Lee Sinins Complete Baseball Encyclopedia. The first table shows the leaders. The second one has their rate divided by the league average. I am not sure if this proves anything, but it was fun to compile and see who the leaders were. 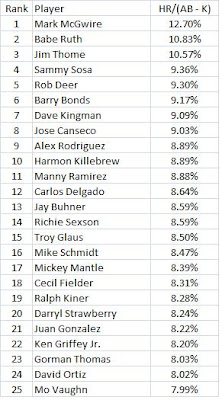 Posted by Cyril Morong at 12:27 PM No comments: