The Astros have an OPS+ of 70 according to Baseball Reference. It takes park effects into effect as well as the league average (it is calculated a little differently than above). The lowest team OPS+ I found going all the way back to 1920 was 69 for the 1920 Philadelphia A's. So the Astros are close to that.

That may not be an earth-shaking headline. But considering that they also led the league in OPS+ and DER (defensive efficiency rating), that is impressive. Probably not a big surprise since they are often seen as the greatest team ever. I wrote a post a few weeks ago called What You Don't Know About The 1927 Yankees. It discussed some of their statistical accomplishments. Their won-lost record of 110-44 actually understates how good they were.

The table below shows how the teams ranked in FIP ERA. 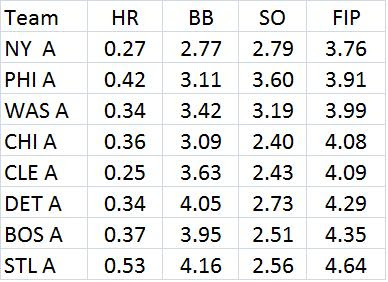 DER is percentage of batted balls turned into outs. See the first post linked above.

There probably are not many teams that lead the league in FIP ERA, DER and OPS+. If I find any more, I will report it. It means they had the best pitching, fielding and hitting. Some combination.
Posted by Cyril Morong at 4:14 PM No comments:

This issue came up in a recent NY Times blog entry. It was A Labor Market (and Baseball) Mystery. The issue had to do with the pay of middle infielders. One economist said:

"Doubles and home runs are disproportionately valuable in high scoring environments than low scoring environments, because their runner-advancing potential is greater when there are more runners on base. In a high-scoring, a home run is more likely to score other runners, and someone who hits a double is less likely to be stranded on second base."

What I did next was find the following ratios, by run value, for 2B/1B, 2B/BB, HR/1B, and HR/BB. Then I found the correlation of those ratios with the runs per game for each year. Here are those correlations for each ratio.

The negative correlations indicate that as scoring goes up, the value of HRs and 2Bs, relative to other events, falls. I checked the scatter plot for the first one to see if there was any sort of non-linear pattern like a parabola, but there was not.

Here were the top 5 years in terms of HR/1B ratio. The numbers in parantheses are the runs per game in that environment. Walks were non-intentional walks.

Here were the bottom 5 years in terms of HR/1B ratio. Notice how these are much higher scoring seasons.

Tom Tango (tangotiger) came up with run values for various events using Baseruns. This is at Custom Linear Weights Values by Team Generated using the BaseRuns system. He looked at all teams from 1919-2000. I ran the same correlations as mentioned above but did not include 1919. Here they are. They show about the same pattern as above. HRs and 2Bs have less relative value in higher scoring environments.

Tom Tango had a good discussion of this issue at Reader Mail of the Day: Environment impacting events .
Posted by Cyril Morong at 3:05 PM No comments: