Which Pitchers Improved The Most In 2008?

I used two different stats to determine this. The first was an imputed value for ERA based on HRs allowed, walks and strikeouts (sort of a poor man's DIPS ERA). The other was RSAA from the Lee Sinins Complete Baseball Encyclopedia. "RSAA--Runs saved against average. It's the amount of runs that a pitcher saved vs. what an average pitcher would have allowed." It is park adjusted.

For the first measure of imputed ERA, I ran a regression using all pitchers who had 100+ IP in either of the last two seasons. There were 284 cases. The resulting regression equation was

Those are all per 9 IP. Walks include HBP. Then I took only pitchers who had 100+ IP in both seasons, found an imputed ERA for each of them in each season, and then found their change. They were then ranked from lowest to highest. Lowest would be most negative, so those are the ones that improved the most. Here are the ten best: 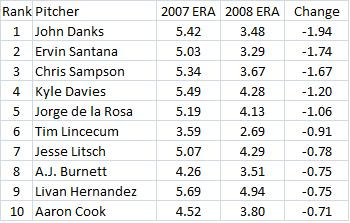 Now the ten who declined the most. 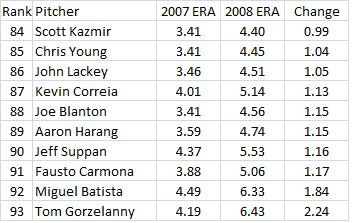 Now the ten best using RSAA. It is on a per 9 IP basis. 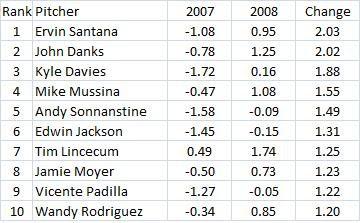 Now for the ten who declined the most. 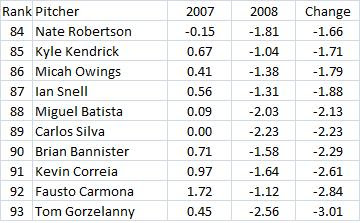 Gorzelany really had a miserable year, being worst in both methods. The first method only takes into account what the pitchers did (but it is not park adjusted). The second method is park adjusted but is not solely determined by the pitcher. Anyone who made both lists either really did alot better or alot worse than the year before. Interesting that Mussina made the best by the RSAA method. He was also 14th by the imputed ERA method. There were 93 pitchers in all. The correlation between the change calculated by the two methods is -.67 (that negative makes sense since a positive RSAA is good). The more runs you save, the more your ERA will be below average.
Posted by Cyril Morong at 2:47 PM