How Good Has Albert Pujols Been And How Good Will He Be?

This issue came up recently on the listserv of the Hornsby (or south Texas) chapter of SABR. Bill Gilbert wrote a report on Pujols, pointing out that he is now 4th all-time in SLG and 5th in OPS. But as he gets older, those ranks might slip. This got me thinking about how much a player might slip in percentage rankings since they might not be as good as they age.

So I looked at where some players (probably not a very scientifically selected group) ranked at early and late stages of their careers. I tried to find periods that parallel Pujols so far. But I was not always able to. In the table below, I either divided a players career roughly in half, or did the first 8 years and next 8 years 9since Pujols has 8 years so far). Then I also simply used when a guy really started to dropoff as a dividing line. The last 10 lines are all power hitting 1B men. Those guys I found by getting the top 10 all-time in SLG relative to the league average with 5000+ PAs using the Lee Sinins Complete Baseball Encyclopedia. That should give a group that is like Pujols (Greenberg and Mize don't appear due to WW II gaps).

Then I found each guys offensive winning percentage (OWP) for the given period. OWP is a Bill James stat that says what a team's winning percentage would be if it had a lineup of 9 identical players who all hit alike and they gave up an average number of runs. Since I got the data from the Lee Sinins Complete Baseball Encyclopedia, it is park adjusted. I also found where he ranked all-time for the stated years or up to a certain year. The normal PA minimum was 5000. But if a guy had, say, 4900 PAs in his first 8 years (or whatever the time periods was), I used that for both periods shown. 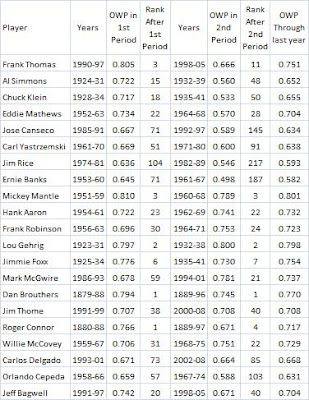 There is quite a variety of outcomes. Some guys fall quite a bit in the rankings due to a much lower performance in their 2nd half. Some actually did better and rose in the ranks. So based on this, where Pujols ends up is not clear.

The other thing I did was to look at the normal performance trajectory as players age. I found all the players who had 15+ seasons with 400+ PAs up through 2005. Then I found the average OWP for each age from 20-40. The graph of that is below. 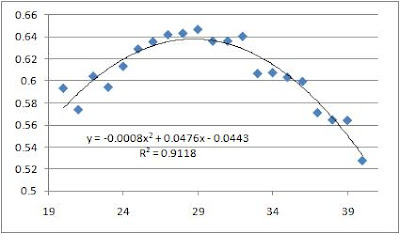 It looks like the ages 21-28 are symetric with the next 8 years. So the overall OWP is the same in each period. If that happens for Pujols, then he will not change much. Without getting into the details, I calculated his OWP will be .768 over the next 8 years based on what he has done and what the historical trends are. I project that if he plays until 40, he will end up with about a .755 career OWP, staying 10th (Musial is 11th at .752). For what is probably a more scientific treatment of aging and performance in baseball, see PEAK ATHLETIC PERFORMANCE AND AGEING: EVIDENCE FROM BASEBALL by J.C. BRADBURY.

One last thing about Pujols. His career really does not have the kind of rising arc that the historical trend shows. So we can't be sure how any of this applies to him. Here is the chart of his OWP by age: 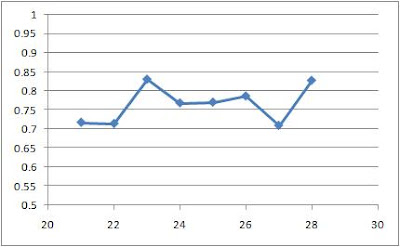 Roughly he will have an OWP of .784 over the the rest of his career.
Posted by Cyril Morong at 3:26 PM