Part 1 was a few weeks ago (you can scroll down to see it). I looked at the slugging percentage (SLG) divided by the league average for all 8 every day fielding positions. Here I look at how many players in each decade were among the top 100 or 200 seasons at each position in offensive winning percentage (OWP). OWP is a Bill James stat that says what a team's winning percentage would be if it had a lineup of 9 identical players who all hit alike and they gave up an average number of runs. Since I got the data from the Lee Sinins Complete Baseball Encyclopedia, it is park adjusted. The PA minimum was 400.

The first table is the top 100. The second table has the top 200. After the tables is a little discussion then there are two more tables. In those tables I adjust the figures to account for the different number of teams in baseball at different times. 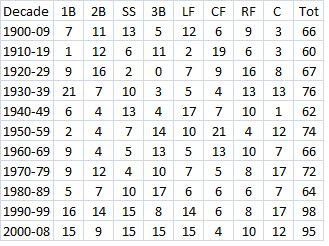 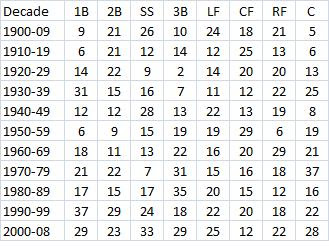 One general comment is that using the Sinins database, a player is listed at the position he played the most. Jimmy Dykes is a SS in a year he only plaed 60 games there. It might be better to only use seasons with 100+ games at a position. Maybe if I get time someday I will do that. Then guys like Dykes could be put into the utiltiy category. Musial had 3 at 1B, 1 in LF, 1 in CF and 4 in RF. He gets lost in the shuffle and deserve to be remembered because he is Polish.

For the tables below, I divided the absolute total for each position in each decade by the number of teams in MLB that decade. That got multiplied by 30. The first one has the top 100. The second has the top 200. 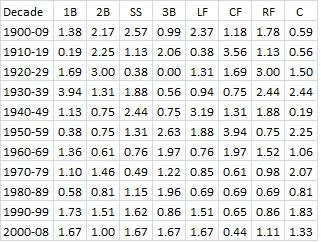 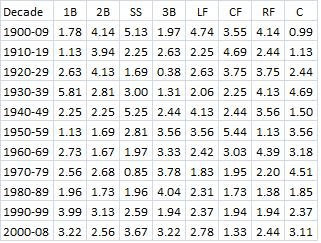