Yes, Chris Sale of the White Sox leads the AL in ERA (with 2.30). Strasburg is 4th in the NL with 2.35. The table below has some statistical comparisons. FIP ERA and xFIP ERA are from Fangraphs and I have the definitions below. ERA+ is from Baseball Reference. 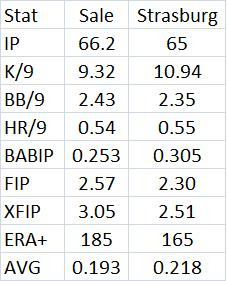 Strasburg, using Baseball Reference splits, has struck out 27.7% of the non-pitchers he has faced this year. Sale has 26.3%. Very close.

I am not sure if Fangraphs takes park effects into account on FIP and xFIP, but the pitching park factors from Baseball Reference for Sale from 2010-2012 are 103-106-105, meaning it scores 3-5% more than average and Strasburg has 99-100-100, meaning it is just about average. So Sale's park hurts him a little more than Strasburg's.

Sale has a big lead in ERA+ which is ERA adjusted for the league averae and park effects at Baseball Reference. It could be due to Sale's lower BABIP. If he had Strasburg's .305, it looks like it would add 9 hits and that, on average, would be about 4.5 runs. That would give Sale an ERA of 2.90 and I think his ERA+ then would be about 150. Then Strasburg would have a big edge.

FIP: Fielding Independent Pitching (FIP) measures what a player’s ERA should have looked like over a given time period, assuming that performance on balls in play and timing were league average.

xFIP: Expected Fielding Independent Pitching (xFIP) is a regressed version of FIP, developed by Dave Studeman from The Hardball Times. It’s calculated in the same way as FIP, except it replaces a pitcher’s home run total with an estimate of how many home runs they should have allowed. This estimate is calculated by taking the league-average home run to fly ball rate (~9-10% depending on the year) and multiplying it by a pitcher’s fly ball rate.
Posted by Cyril Morong at 9:43 AM