Here are the AVG-OBP-SLG for each league, so far, for the month of May:

Generally, the OPS for all of MLB in April and May combined are pretty good indicators of the OPS we will get for the whole season, as shown in the table below: 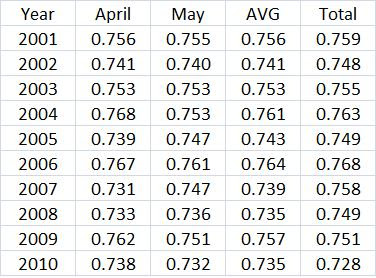 The AVG is just the simple average of each of the first two months. It looks like May usually has slightly more PAs, but this is probably a good approximation. The Total column is the MLB OPS for the entire season. In only two seasons was the overall OPS 10 or more points higher than for April/May. The average is for the whole season OPS to be 4-5 points higher. So it looks like we are in for a very low offensive year.

Since I mentioned Paul Konerko last week and his general patter of doing much worse in May than he does for the whole season, his OPS so far this month is 1.212 after .836 in April.
Posted by Cyril Morong at 5:59 PM