May Hitting So Far Has Been Even Worse Than April Hitting

Was it the weather? I sure don't know. Both leagues have an OPS 20 points lower in May than April. Here the stats for April and May so far in both leagues: 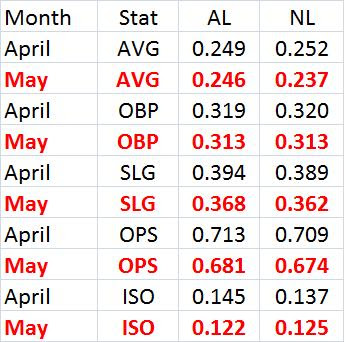 One guy going against the trend is Paul Konerko, who usually does terrible in May. See May Day, May Day! Throw Konerko A Life Preserver. But in April he had an .836 OPS while it was 1.123 in May through yesterday. And today he went 5-for-5! His career April OPS is .860 while in May it is .719 (the lowest of any month in his career not counting March when he has only 12 ABs). His overall career OPS is .855.
Posted by Cyril Morong at 4:43 PM