Indispensable Seasons Go To WAR! (Or Did Willie Mays Have The Greatest Season Since 1950 in 1962?)

If you are still reading, thanks. I will try to explain.

Suppose a team comes in 1st place, finishing 1 game ahead of the 2nd place team. John Smith had a WAR (wins above a replacement player) of 6. Then is "INDWAR" would be 5 or 6 - 1. His team needed 5 of his WAR to get them into at least a tie for first.

The table below shows the top 25. 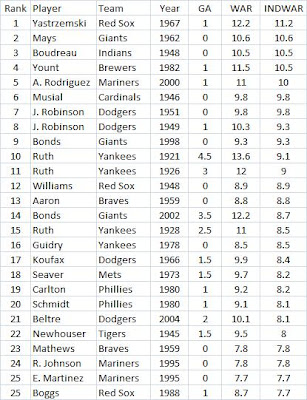 When you see a "0" in the games ahead column, it means that player's team tied for first place with another team. Then they had a playoff. Their season's WAR included what they did in the playoff game(s). I tried to estimate their WAR from any playoff games. Probably the most anyone got was about .4 by Boudreau in the one game (he went 4-for-4 with 2 HRs). Some cases are teams that were wild cards, like the 2002 Giants. So they would have been so many games ahead of the next best team. Some 1st place teams in the wild card era were either compared to the 2nd place team in their division if that team was not the wild card or the team that finished 2nd in the wild card if their division's 2nd place team was the wild card.

It probably does not surprise anyone that Yaz is first. But Willie Mays 1962 is not far behind. Guidry 1978 is the highest pitcher. But he probably got a very small amount of WAR in the playoff game (he pitched well but not great). The 1980 Phillies needed great years from both Schmidt and Carlton just to eke out a 1 game victory.

Many of the players are Hall of Famers. Ruth also has the 37th best season in 1916, as a pitcher!

I wondered how well some of these guys did in the clutch that year. So I looked at the top 10 since 1950 when Retrosheet has stats like hitting with Runners in Scoring Position (RISP) and in Close and Late Situations (CL). The table below shows how well the top 10 hit in all situations. 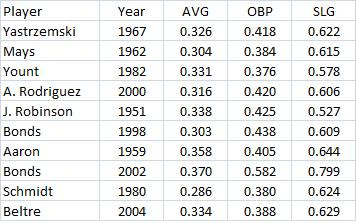 Now with Runners on Base (ROB) 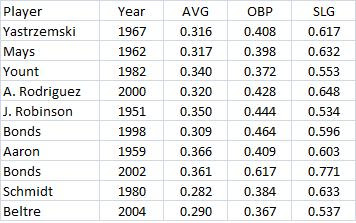 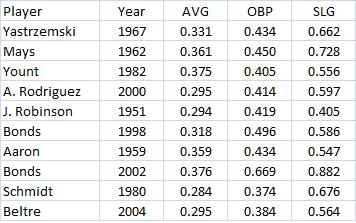 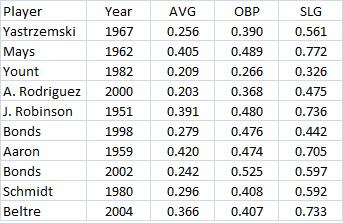 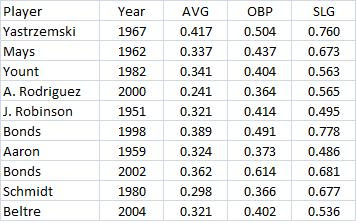 If you examine those numbers closely, you will see that the only player to have a higher AVG, OBP, and SLG in all the "clutch" cases than he did in Total was Mays. Click here to see all of these stats grouped by player. It might be easier to see that only Mays did better in all the clutch situations.

In fact, Willie Mays was the best of the ten in Tom Tango's clutch rating, which involves WPA or Win Probability Added. All plate appearances are rated for how much they affect the outcome based on score, inning, etc. Here is the definition from the Fangraphs cite:

"Clutch: A measurement of how much better or worse a player does in high leverage situations than he would have done in a context neutral environment."
Here is how well the top ten did:

This means that Mays' extra good hitting in high leverage situations added 1.4 wins. Seeing as how the Giants finished in a tie with the Dodgers in 1962, that is very important. Mays did well in the 3-game playoff series, too. In game 1, he went 3-for-3 with 2 HRs and a walk. One HR was off of Koufax, in the first inning with one on to get the scoring started. Giants won 8-0. In game 2, he was 1-for-5 and the Dodgers won 8-7. In game 3, he was 1-for-3 with 2 BBs. Giants won 6-4, getting 4 runs in the top of the 9th. Mays singled in a run in that rally and scored another.

When it was all said and done, a great player had to have one of his greatest seasons just to get his team into a playoff. Mays had to hit much better than usual in the clutch and come through in the playoff. What could be a more fantastic year than that?
Posted by Cyril Morong at 4:28 PM

thanx for reminding me about the year that WILLIE MAYS became my hero , my idol and yes role model to this day ....

i can remember hurrying home from school that year so i could turn on the radio and catch the end of the games - they were still playing many games during the day and a 1PM start meant that i could catch the last 3 innings if i didn't bide my time on the way home - i did not have a transistor (portable) radio nor were my parents about to get me one - we did huddle around a friends radio during afternoon recess to catch the 3rd or 4th inning ...

What i remember about that 9th inning was Mays coming to the plate with the bases loaded -DODGER pitcher was ED ROEBUCK , a sinker-ball pitcher so i was worried about the double play for sure .... and the single you referred to was a line drive off of the pitchers leg driving across either the tieing run or the go-ahead - great daze for sure - greatest of times - a great season for MAYS & a heart break of a WORLD SERIES as well ...i was 8 yrs old -


i wish i could remember what i actually sat down at the computer to do this AM as well as i can remember that 3rd game of the play-offs ...GO GIANTS !!!!

Great story. Thansk for dropping by and commenting. Hard to believe he did not get the MVP award that year. I guess the voters ere just mesmerized by Maury Wills' 104 SBs. It is funny about memories. I can recall the MVP, Cy Young winners from the 70s alot better than the recent ones