While watching the Ranger's broadcast of their game vs. the White Sox last night, one of the announcers said something about how Josh Hamilton's HRs are usually very important, like the one that put them ahead 2-1. Then he said something about Sammy Sosa like "in those years when he was hitting 60 HRs, he alot of them when the game was one sided."

But we can easily imagine that Sosa had to face some very tough relievers in those CL situations, who might have been told to not give him much to hit. The following table summarizes his stats in various situations in each of the four seasons. Sept and Oct data are shown for 1998 & 2001 because in those years the Cubs were fighting for a playoff spot. In general, I think the numbers show that he hit very well with runners on or in CL situations or late in the season when the Cubs were trying to make the post season (they finished last in both 1999 & 2000). Sosa hit alot of meanigful HRs in these years. There is nothing misleading or deceiving about his performance or his stats. 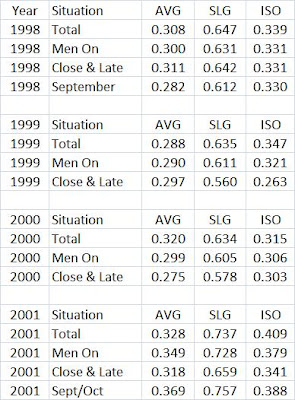 To see what the normal clutch/non-clutch differentials are, go to General Clutch Data.
Posted by Cyril Morong at 3:44 PM