The Marginal Impact Statistics Have on Hall of Fame Voting

A couple of weeks ago I presented a binary (logit) model of Hall of Fame voting. I looked at all players whose first year of eligibility was from 1990-2009 (except for Pete Rose). The model's equation estimates the probability that a player would be elected to the Hall of Fame (though not necessarily in his first year of eligibility). Of course, there are coefficient estimates and what I do here is give the change in the probability of being elected due to a change in a hypothetical player's stats.

The first line in the table below shows that his probability of being elected was .50 or 50%. The rest of the table shows what his probability would be if his stats changed. For instance, if his career average had been .300 instead of .290 (with nothing else changing), his probability (or PR) rises to .663. Another 10 point gain in average brings it to .795. But if he had only hit .280, the PR is just .337. Of course, other things might have changed if his averaged had changed. Maybe 100 RBI seasons or all-star games played would have been different. But I will have to assume that they did not. The different cases for AVG are in red. More discussion follows the table. You can see a larger version of the table if you click on it. 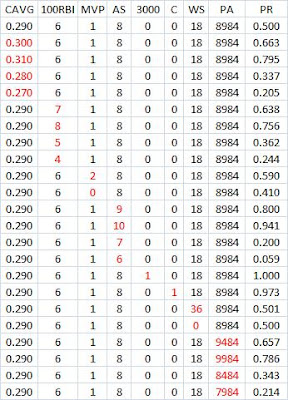 I also did the same test for an actual player, Jim Rice. His predicted PR was the closest of any of the players in the study to .50 at .595. The next table has the marginal changes like the one above. Maybe the biggest impact for Rice is all-star games. If he had just one less, his PR falls to .269. In general, his table looks similar to that of the hypothetical player. 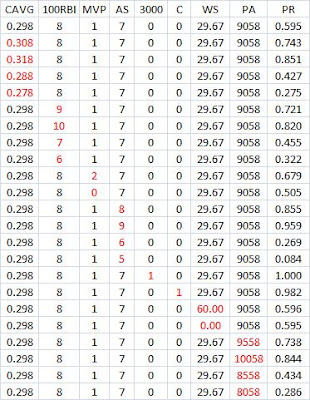