Does The "High" April Slugging Percentage Mean Anything?

(note: I will have another post on Hall of Fame voting next weekend)

It sure seemed like there was lots of slugging going on in April. The SLG for MLB was .420 for the month, much higher than the .402 and .401 for the two previous seasons. The table below shows the SLG for April and post-April for each of the last 10 years (5 years had some March games, so I included that data in April for those years). 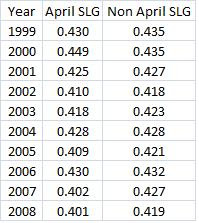 The average April SLG over the last 10 years is just about .420. So it may not be that high, although in beats 5 of the last 7 seasons.

The graph below shows the relationship between April SLG (horizontal axis) and non-April SLG (vertical axis). 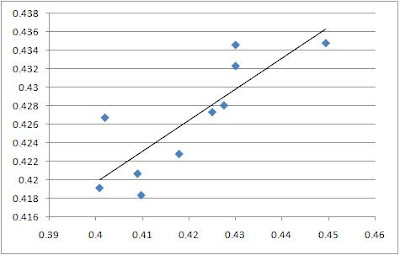