Who Was The Greatest "All-Around" Player Ever? Another Quantitative Attempt (Part 2)

To see Part 1, go to Who Was The Greatest "All-Around" Player Ever? Another Quantitative Attempt. I used four stats: one for fielding, one for speed (based on triples), one for hitting for average and one for hitting for power (ISO). There was a park adjustment, too. The four stats were multiplied by each other and I calculated their geometric mean. Players had to have 5000+ career PAs.

In this case, I used a stat for stolen bases for speed instead of the one for triples. Because of that, the isolated power stat here was not adjusted for triples like I did the first time. The stolen base stat is SBs divided by number of times reaching first base (singles + walks + HBP). That was then divided by the league average. The next post I do will combine triples and SBs to make a speed stat. I think that neither a SB stat nor a triples stat are good enough by themselves.

He was 8% better at fielding. His SB rate was 3.41 times the league average. 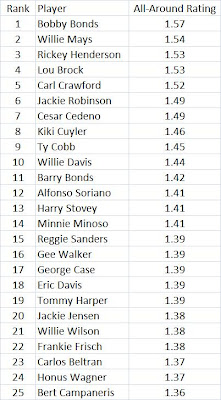 Willie Mays once again does extremely well (Bobby Bonds was 23rd before). He was 3rd in the other measure using 3Bs for speed. DiMaggio was first. But here he fell to 449th. His stealing rate was only .37. Rickey Henderson rose from 284th place since he did not have very many triples (he was just about average). So some players moved up or down in the rankings quite a bit. The SB rate had a bigger range than the SB rate (although the correlation between the two rates was about .56). It went from 5.35 down to 0.019. The triple rate ranged from 3.85 down to 0.197.

I also calculated an "above replacement" level value, using the same method as last time. Here is the top 25. I don't think the number has any real meaning or interpretation. This just allows us to take into account longevity and the typical decline in performance that we normally see. Mays was 1st in this one last time. Mays probably would gain on Henderson if I could split fielding into throwing and catching (which I will try to do at some point). Would it be enough to pass Henderson? If so, I think it would strengthen the case for Mays being the greatest all around player ever since he ranks so high using either SBs or 3Bs for speed. 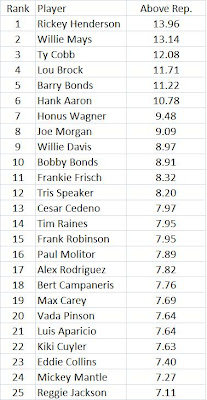 Was SB just a raw total of SB? I would be curious to see it as SB-CS instead.

Thanks for dropping by and commenting. Unfortunately, CS are not available for all years. I could do this starting with the AL in 1920 and the NL in 1950

It could be that missing CS is not a huge deal.

Then I found the correlation between the "SB rate" and the "SB run rate." It was .93. So, in other words, guys who steal alot also have pretty good success rates.