To look at this I did a regression with ERA as the dependent variable and HRs, BBs, and SOs (all per 9 IP) as the independent variables. The data includes all pitchers from 1960-1974 who qualified fore the ERA title. Here is the equation:

Once I found the ERA predicted by this equation for each pitcher (Pred in the table below), I divided it by the league ERA in the relevant year. That number is called Ratio. The lowest ratio belongs to Gibson in 1970 with .59. Notice that he had more strikeouts per 9 IP in 1970 than in 1968. The walks were a good bit higher but HRs were pretty close. And the league ERA was much higher in 1970 (4.05 vs. 2.98). 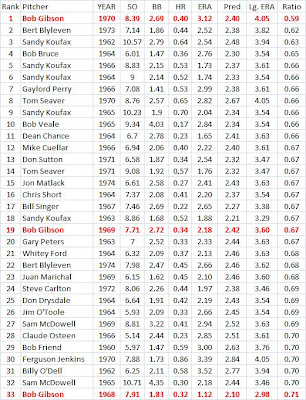 Thanks. I did write about his RISP performance once before. See

Also, his FIP ERA from Fangraphs in 1970 was lower relative to the league ERA than in 1970.

Not only did Gibson strike out more batters per IP in 1970 he also ranked higher in HRs allowed per 9 IP (2nd vs. 5th)