Who Was The Least Likely Triple Crown Winner?

This is related to my most recent post from Friday

I came up with a point system for this. A player would get 10 points for each time he led his league in HRs, 9 for a 2nd place, etc. The same was done for AVG and RBIs. So the player had a career total number of points for each stat (data from the Lee Sinins Complete Baseball Encyclopedia). A tie for 1st was still worth 10 points. Then those three numbers were multiplied times each other (meaning if a player never finished in the top 10 in one of these stats, his total will be zero). So the idea was that players that finished among the league leaders often are the ones most likely to win the triple crown.

The table below shows the point total for all the winners, from lowest to highest. I used the list from The Baseball Almanac. 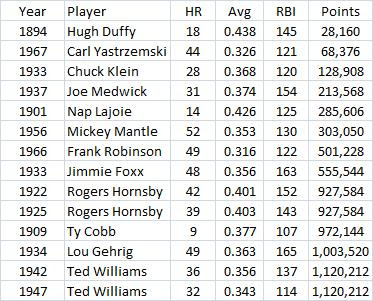 Baseball Reference includes Paul Hines (1878, 36,613 points) and Tip O'Neill (1887, 50,525 points) but not Duffy. They have Sam Thompson leading the NL with 147 RBIs in 1894 and Duffy with 145. Click here to see the leaders. Hines' point total includes one year of 6th in average in the National Association, the precursor of the NL. O'Neill played most of his career in the American Association and all of his points are from that league.

So, depending on who you want to count, it is Duffy, Hines or O'Neill. Yaz is definitely the one from the live ball era (If I use the data from Baseball Reference for Duffy, his point total would be 50,456, including data from the American Association-Click here to see his page)

I did not take age into account. The oldest was Gehrig, but 31 is not that old and he is 4th all-time in this point total (see Friday's post). Cobb was just 22, but he is 5th all-time. I also did not try to figure out how far from the leader these guys were when they finished in the top 10. That could matter but I would have to come up with a way to evaluate it.

Babe Ruth was by far the most likely to win who did not. In fact, his point total is way ahead of everyone else (Ted Williams might have surpassed him without military service). How could Ruth have not won it, even once? He led the league in HRs 12 times and RBIs 6. He did win one batting title. His 81 points from AVG is the 13th highest of all-time.

In his era, not surprisingly, he ranked very high in AVG. Here are the top 4 in AVG in the AL from 1918-1931 (covering all the years he led the league in HRs) for AL players with 2500+ PAs (data from the Lee Sinins Complete Baseball Encyclopedia):