Players With Three Or More Consecutive Seasons With 7+ WAR

One idea I have about the Hall of Fame is that worthy players should have at least some significant peak value. Maybe something like 3 straight MVP caliber years. Baseball Reference suggests that a WAR of 8 or higher is an MVP type season. So I lowered it just a bit to 7. This would actually make for a very restrictive Hall. I found only 36 players in this group. They are listed below.

The co-leaders are Henry Louis Aaron and Henry Louis Gehrig. Their two streaks were exactly 30 years apart. Gehrig's was 1926-37 and Aaron's was 1956-67. Some great players did not make it, including Frank Robinson and George Brett (who are definitely Hall of Famers, probably in anyone's book). Ron Santo had 4 straight years, 1964-67. Jackie Robinson had 5 straight from 1949-53. That is incredible. Andruw Jones and Jim Edmonds are two of the more interesting surprises. 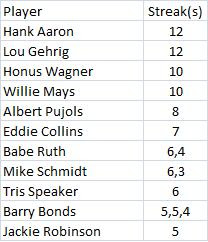 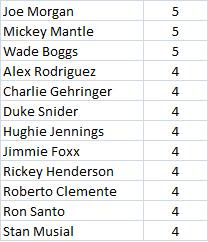 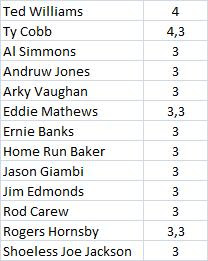 Very interesting group of names. Andruw Jones must be on the list for his incredible defense. Edmonds was a very underrated player in his prime who should someday merit HOF consideration.
Good stuff,
Bill

Thanks for dropping by and for mentioning me on Twitter. Jones did get alot of his WAR from defense. Here are his numbers for WAR/defensive WAR from 1998-2000

He led the NL in defensive WAR 6 straight years from 1997-2002. He is 2nd in career defensive WAR only to Brooks Robinson. Two of those years above are in the top 8 all-time in.

Edmonds never made 2.0 in defensive WAR in his three seasons, although he did have one year later in his career of 2.4.