The first thing I tried to do was create a set of comparables. So I found all the 1B men who had 4000+ PAs before the age of 32 since 1920 who also had a relative slugging percentage of 120 or higher (that means their SLG was 20% better than the league average-I used the Lee Sinins Complete Baseball Encyclopedia). These guys had to have played at least half their games at 1B. I also included any DHs that fit (that added in Frank Thomas). So I was trying to set up a group of power-hitting 1B men to use in comparison. I went up through 2009.

This made for a total of 35 players. Three are still active (Thome, Giambi and Helton). But, of the 32 who were not active, just 8 of them had 1000+ PAs after the age of the 35. Here they are with their RCAA, or runs created above average (it is park adjusted): 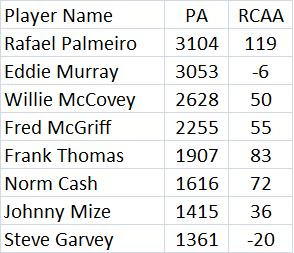 Now the best performer here seems to be Palmeiro. We don't know how much of his performance was due to drugs. Again using the 700 PA for a full season, he gets 4.43 seasons. If we assume a -2 wins below average for a replacement player, that gets him 8.86 WAR. Then if we assume about 10 runs per win, his RCAA gets us about 12 wins. Then we are at about 21 WAR for Palmeiro as the best performer among Pujols' comparables (of course, I am assuming no negative WAR from defense).

Of course, Pujols is better than the average of these guys. This group collectively had only about 38% as many PAs post-35 than pre-32 and their average RCAA per PA fell from about .069 to about .022 (I added 1000 PAs and an RCAA of 100 to Mize for ages 30 and 31 which were missed due to the War). That means that Pujols, if this goup is an indicator, will get 2846 PAs after age 35 and get about .0338 RCAA per PA (he has average about .10 RCAA per PA so far in his career (I estimated his RCAA for the last two years since I don't have the latest Sinins data yet).

I assumed that Pujols' dropoff in RCAA per PA will be the same as this group. So he would get about 96 total RCAA. So that is 9.6 wins. Then he gets about 4 full seasons so we had another 8 wins, again assuming -2 wins is replacement. So that would be 17.6 WAR for Pujols after age 35 (again assuming no negative defensive WAR). Remember that he has 6 contract years at $25 million a year. So the Angels will be paying $150 million for 17.6 WAR or $8.5 million per WAR. Maybe with inflation, a championship or two and extra ticket sales that might be worth it.

Now the three guys who are still active are Thome, Giambi and Helton. He are their PAs and OPS+ after the age of 35 so far

I assume Helton will get past the 1000 PA mark. So combining this group with the others would mean that we have 11 out of 35 of the comparables getting at least 1000 PAs. I don't have their RCAA for the last two years and I don't know how much more they will play but my guess is that if I added them to the other 8 guys and re-did the analysis it would not change things much.

One thing to remember though is that Pujols is a very unusual player. He started playing full-time at age 21 and in 11 seasons has not missed many games. Only 20 players since 1920 had more PAs under the age of 32 than he did and only 3 had more WAR. So maybe looking at other power-hitting 1B men is not the way to go. One interesting thing here is that some other all-time great 1B men did very little after the age of 35. That includes Gehrig, Foxx and Greenberg. But perhaps each of them has highly unique reasons for not aging well that won't necessarily apply to Pujols. Gehrig had ALS, Foxx was a drinker and Greenberg had the chance to move into the front office.