That was by far the lowest of his career. So another reason why that season was so great. I did not see very much on this. See The Great Forgotten Season: Carl Yastrzemski, 1967 by Cody Swartz of "Bleacher Report."

That season was also one of the most indispensable seasons ever, meaning his team really needed him to have a great year. See Indispensable Seasons Go To WAR!

The table below show's his GDPs and GDP rate for each year of his career. 1967 was much lower than any other year. I also show his SO rate for each year (using PA - IBB - SH). Data from Baseball Reference. I thought maybe if his strikeout rate had been alot higher that year it would account for the lower DP rate. But it does not look that way. The one thing Yaz did that year that he never did before was hit alot of HRs, 44. His previous high had been 20. So maybe putting the ball in the air more helped. Baseball Reference does have his FB/GB ratios for any year. But in other years when he hit 40+ HRs, the GDP rate was not so low (1969 & 1970). Maybe he was just faster that year.

The average of those two is .16 and over 9 DPs avoided, it is just 1.44 runs. That may not be much but when the Red Sox and Twins played the last game of the season tied for first, the lower DP total might have mattered.

Now maybe Yaz got hits instead of hitting into DPs. But the two other years when he hit over .320 he had about a 10% GDP rate, still much higher. So we can't simply say he hit better that year and that caused the lower GDP rate. 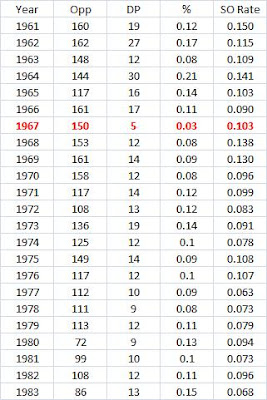