Should Thurman Munson Be In The Hall Of Fame?

I'm looking at this because it was discussed at Baseball Think Factory. That discussion was inspired by a new website that is trying to get Munson in called VoteThurmanIn.com.

Munson is 14th in career WAR among catchers. Here is the top 22 from Baseball Reference (I went to 22 so I could include Campanella). It also shows their best three consecutive seasons (which I just eyeballed to find) and the number of times they finished in the top 5 and 10. These guys played at least 50% of their games at catcher. 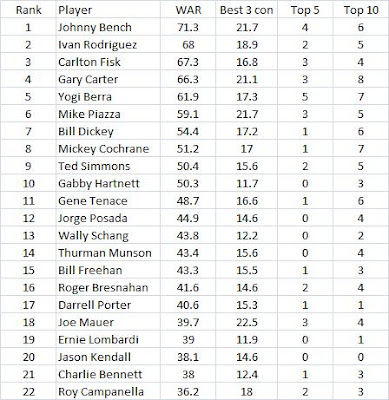 Now Munson is only 240th among position players in career WAR. That probably is not enough for the Hall. But catchers don't have the longevity of other players, so being in the top 15 is impressive. If he had not died at age 32 in 1979, he might have made the top 10. He was on a pace to get about 3.6 WAR in 1979. He also had over 3 the previous year.

Tenace is ahead of him in career WAR but only about 58% of Tenace's innings were at catcher (Munson is about 97%).

Munson also is 144th in MVP shares (at 1.50). That is good considering that catchers don't do that great in the voting. See my post called MVP Awards And Award Shares By Position. So his contemporary observers liked him. He also won three Gold Gloves.

Fangraphs has him at 21st in career WAR among catchers. But some of the guys ahead of him played less than half their games at catcher: King Kelly, Joe Torre, Brian Downing, Buck Ewing. Tenace and Bresnahan are both ahead of him, too. Bresnahan played about 70% of his games at catcher (this all points out something problematic with the position regarding the Hall of Fame-many guys who played there got moved to other positions). And again, don't forget that Munson died young. He could have moved up in the rankings.

Just what I have done so far is probably not enough. But I think we should be looking at him as a serious candidate.

Thanks. Good ideas. Maybe I will get to them in a few days. I have to give finals tomorrow in my two summer school courses.

Through age 32, here are the top 10, playing at least 50% of their games at catcher, career WAR, Baseball Reference

I don't know how Ewing gets in since he had 636 games at catcher and played in 1315 games. Maybe it was more than half through age 32.

You're welcome. Sorry I didn't realize it has been around for so long.

Munson belongs in the HOF. The WAR analysis is telling. He was the captain of two World Championship teams, a ROY, MVP, gold glover and regular all star. He was also an outstanding post season hitter. He hit the longest homer of his career just several months before he died, so his career would have lasted at least to the end of contract. In 75-77 he became the first in the AL since Al Rosen in the 50s to hit 300 and drive in 100 runs three years in a row. Yet 73 was his best year. In 71 he made one error and it involved dropping a ball when a runner crashed into him at the plate giving him a concussion. The scorer probably made a mistake on that one. Munson came closest to having an error free season of any catcher in history. And he called a great game behind the plate.

You make some good points. Thanks for dropping by.

Though he had a off year or two, he was a standout from his rookie season. He was the heart and soul of the team which restored yankee excellence, which is the epitome of baseball excellence, brought them to the series after their longest drought, and was league mvp. He played a position where few excel offensively, and some of those that have, sucked defensively. He handled pitchers well-fritz peterson had a lower ERA in his yankee career than whitey ford. He played in a park that was fairly tough on right handed hitters, and another (shea) that was tough on all hitters. He's entitled to some level of statistical extrapolation-after all, he was only 32. And we're still talking about him. Its not all about statistics.


He was named Yankee Captain when it had been a given no one would be named Captain again. He gets extra points for having his career cut short. It seems like the overriding philosophy of those who are against him getting in was an assumption that he was washed up. His power numbers were down, but he was never a power hitter anyway and a lot of players start hitting for more power in their mid 30s, since he was killed before men peak in strength. He is thought of as giving up catching, and he did play his last game at first, but he caught 88 of the 97 games he played in his last season, and we've seen catchers, including the anti-Munson, Carlton Fisk, manage to catch regularly into their 40s, which was unheard of at the time. He was in the top 10 in the MVP race 3 of his last 4 seasons, largely reflecting his overall play and intangibles. He easily would have gotten 2000 hits. He was great in the clutch. His uniform was always dirty. The Yankees couldn't fill his shoes, and 33 years after his death, wearing his jersey is taken as seriously as serving as a pall bearer at a funeral . He was killed due to his devotion to his family - he wanted to be traded to Cleveland to be with them at a time when the Tribe was like MLB's equivalent to The Forbidden Zone in Planet of the Apes. Although certain quantifiable accomplishments are part and parcel of HOF selection, its the Hall of Fame, not the Hall of Best Statistics.

His rivalry with Fisk is perhaps the premier individual interteam player rivalry in the annals of the game. He stood up to Steinbrenner and in doing so, made him a better owner.

Was Gary Carter really that much of a better catcher? True, he hit more homers. He drove in 100 runs 4 times, Thurm did it 3. Carter's most was 106, Thurm's 105. Thurm had a lifetime BA 30 points higher (OK, it probably would have dropped, but not anywhere near that). Yes, different leagues and teams. Carter was never MVP. Thurm made 7 all star teams and was rookie of the year in another in which if he wasn't rookie, probably would have been on the team.

When Thurman died, he was being measured against Clemente for immediate admission. It was a tough comparison, because Clemente was 38, and had already reached the 3000 hit milestone. Its easy to see why the writers weren't ready to admit him right away, especially since first ballot seemed to mean a lot more then than now. The Veterans Committee should only be used when there is a compelling reason to say that the perspective of history shows that someone deserving was passed over. I believe wholeheartedly that Thurman Munson is that rare example, and should be enshrined in Cooperstown.

Thanks for reading and commenting.

"He handled pitchers well-fritz peterson had a lower ERA in his yankee career than whitey ford."

"He played in a park that was fairly tough on right handed hitters, and another (shea) that was tough on all hitters."

That is a good point and park factors might not do him justice. But his SLG at home was .408 while .411 on the road.

"He was great in the clutch."

I don't think it is good to look at RBIs since they are heavily affected by opportunities. Yes, Guidry had a great year in 1978, but many pitchers have great years they never repeat, like Vida Blue and Dwight Gooden.

I would not use AVG to compare the two

Compare his stats to another catcher whose career was cut short, and who is in the Hall of Fame: Roy Campanella. Some similarities there...

Thanks for reading and commenting. If you look at the table, Munson and Campanella are similar. Maybe Campy got credit for Negro league play.

I did my dissertation on the Federalist Period

I didn't see Campy in those stats. He had a short career cut short like Thurm. He had 3 MVP's, not one, but Thurm was still great in his era. I STILL believe better than Fisk.

With all due respect, I think even Carlton would say, Thurm meant more to his team than the stats. The Yanks NEEDED him during the crazieness of the Zoo. Just like Yogi in the Casey Era. Casey used to say: "I never play a game without my man." He WAS that guy for Billy! Not to mention Yankee fans everywhere. We could aways count on Thurm!

Thanks for reading and commenting. Campanella is on the list in the table.

Lots of people say their favorite player had some kind of intangible that makes them a Hall of Famer or better than some other guy. Those kind of statements are always hard to prove or dis-prove.

Here is what Branch Rickey said about intangibles

"But somehow baseball's intangibles balance out. They reflect themselves in other ways. Over an entire season, or many seasons, individuals and teams build an accumulation of mathematical constants. A man can work with them. He can measure results and establish values. He can then construct a formula which expresses something tangible, and that is why this formula was devised."

Read more about Rickey's formula at