Did Earl Averill Have A Tremendous Walk-To-Strikeout Ratio?

Joe Posnanski recently wrote at his blog the following:

"As you have already seen, the only two Hall of Famers who hit home runs in their first at-bats — Averill and Wilhelm — were not famous for home runs. Averill did have three 30-homer seasons, but it was his all-around play, including a tremendous walk-to-strikeout [ratio] (774 walks to 518 Ks) and superior defense, that made him a terrific player."

See A Homer His First Time Up!

Imagine that the average player hits 15 HRs in a full season. If you hit 13% more, you hit about 17. This is not tremendous."

Baseball history often surprises us (well, it surprises me alot). For example, I discovered that Fritz Maisel, in 1914, had perhaps the greatest base stealing season before Maury Wills in 1962 (taking steals, caught stealing, times reaching first base and the league average into account). I had never heard of him before. See What Were The Best Relative Base Stealing Seasons? There have been many times I started calling up lists of leaders in stats where I start to see names for the first time.

So it is not surprising that we might see a guy like Averill and, not knowing the context, be impressed. Over the past five years in MLB, there have been 80,089 walks and 160,963 strikeouts. That means .5 walks for every HR. Averill's ratio was three times that. But there just were not that many strikeouts when he played. How did he compare to other players? The table below shows the top 25 in walk-to-strikeout ratio from 1929-1940 with 2500+ PAs. 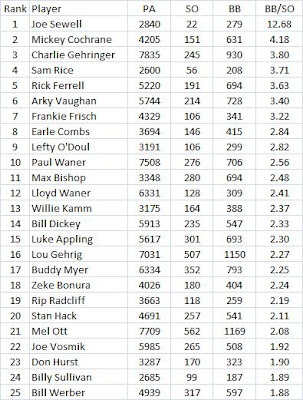 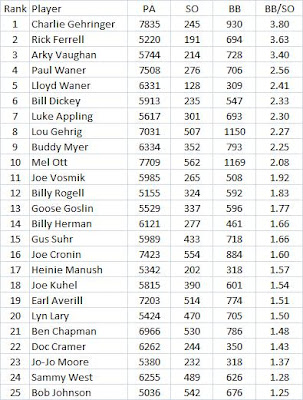 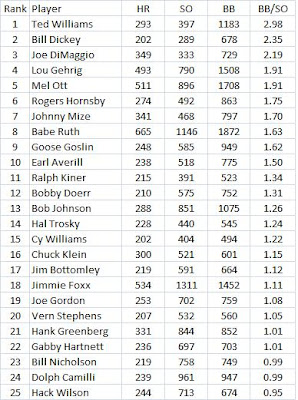 Finally, there were not many big strikeout pitchers in those days. The two lists below show the leaders in both leagues from 1929-40. That guy named Feller sure changed things. Averill did not face him much since he played most of his career for the Indians.