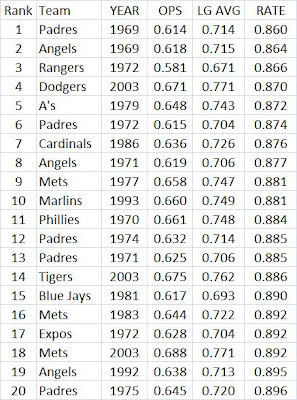 The Astros have an OPS+ of 73 according to Baseball Reference. It takes park effects into effect as well as the league average (it is calculated a little differently than above). The lowest team OPS+ I found going all the way back to 1920 was 69 for the 1920 Philadelphia A's. So the Astros are close to that.

I am not sure what to make from the Astro's park ratings in the Bill James Handbook. For the years 2007-9, they have a run rating of 96, meaning that the runs scored in their park is 96% of the league average. But the rating for AVG is 101 and for HRs 108. So that indicates a slightly above average hitter's park. The walk rate is 98. That does not seem like enough to offset the HR and AVG ratings to say their park is a little hard on the hitters. The error rate is only 87. That might hold down the runs. My best guess is that when it comes to OPS, Minute Maid should be a little helpful to the Astros' hitters.