Below is a post from last year called Starting Pitchers As Relievers Over Time. Alot of people have been talking about starter Matt Garza coming in as a reliever the other day. But it was once fairly common for starters to pitch in relief. I don't claim to know all the reasons why the usage of pitchers has changed over time. But here is that post.

On May 23, 1911, Christy Mathewson pitched a complete game victory giving up only 1 earned run. Then on May 26, he pitched the last 1 and 2/3 innings to get a win. When he came in in the 8th, the Phillies had two men on and had just scored 2 runs to tie the game. Then he got a double play. The Giants scored 2 in the bottom of the 8th and Mathewson pitched the 9th for the win, giving up no hits. The next day he pitched a complete game shutout.

But how often did starters pitch in relief in the past and how has this changed over time? I looked at the percentage of games pitched in relief by starters each decade starting with 1900-09. In each decade I found this % for the season leaders in games started. The number of pitchers in the leaders were 3 for each team in each year. I figured that each team would have at least 3 guys who started fairly often. But I also looked at the % for all pitchers who started at least 31 games (and at least 33 beginning in 1960). So the table below shows these percentages: 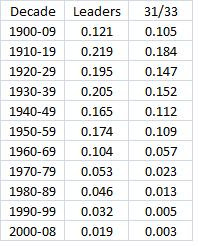 The graph below shows the percentages over time. 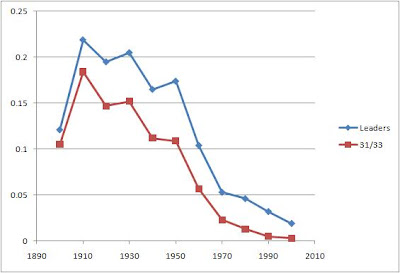