What Were The Best Relative Base Stealing Seasons?

I took all players who had 20+ SBs in seasons when CS was also recorded from the Lee Sinins Complete Baseball Encyclopedia. These seasons were:

Then I calculated each player's basetealing runs (BSR) using the run values from the Baseball Encyclopedia by Pete Palmer. A SB has .22 and a CS has -.35. Once every player's BSR was calculated, I divided it by the number of times he reached first base by single, walk or HBP. That gave him a "rate." Then I calculated the average rate for that league and season. Finally, the difference was calculated. The table below shows the best 25 seasons for players who had 20+ SBs but also 100+ times reaching first base (1866 players). 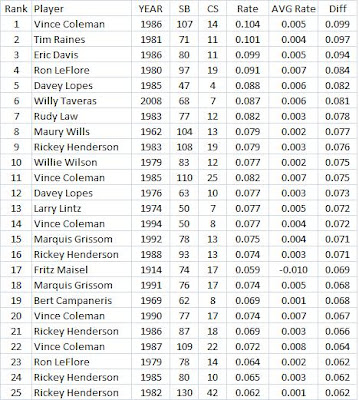 I did not try to find out actual opportunities. A player can get a walk, but if there is a runner on 2nd, he has a harder time stealing. I also used the same SB/CS value for everyone. These run values can vary by year and league, depending on the run environment. Another issue is pinch running some of these guys stole bases (and were caught) while pinch running. Taking this into account might affect the rating. The table below shows how many times each of the leaders pinch ran and their SB & CS while doing so (data from Retrosheet). 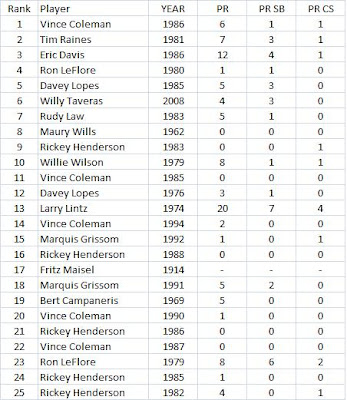 My guess is that if I factored in pinch running that things would not change that much. In some cases, players stayed in the game after pinch-running. Then they got on base as a hitter and stole a base or were caught. Maisel played 150 games that year. Retrosheet lists him with 148 at 2B. He probably did not pinch run very much, if at all. He also had 630 PAs, so he is pretty close to a full-time player.

Now the leaders among players who reached base between 25 and 99 times. These guys either pinch ran alot or did not play alot. 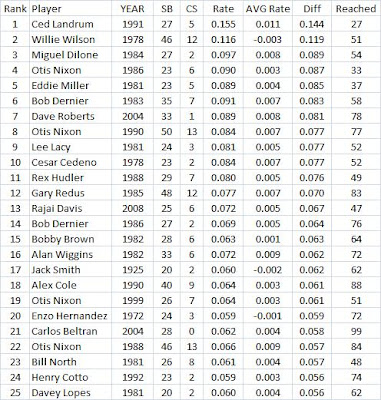 And there was also Herb Washington who stole 29 bases in 1974 solely as a pinch runner.
Posted by Cyril Morong at 2:24 PM