How Accurate Were My Hall Of Fame Predictions?

I posted them on Dec. 17. Click here to see that post. The table shows the predictions I made and the actual vote. My models are aimed at estmating vote % in the first year of eligibility. A few of my predictions were fairly accurate but some were way off. Larkin and Martinez got alot more support than the model says (which I think is a good sign since I think both of them deserve to get in). The model studied the votes in the 1990-2009 period and was based on things like all-star games, gold gloves, MVP awards and miletones, like 3000 hits. 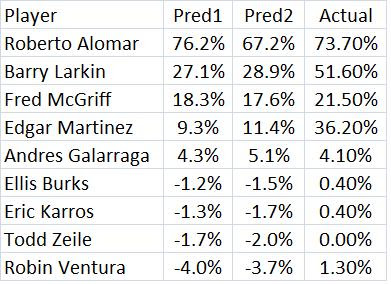 Update on Jan. 8: Dave Allen of Baseball Analysts has an interesting take on who might make it in the future. Go to Looking at Some BBWAA Vote Trajectories
Posted by Cyril Morong at 12:46 PM

Great call on Alomar's votes. Do you think Edgar has a shot at the hall one day? I think he may eventually but not anytime soon.

Thanks for dropping by an commenting. Alomar's % was the first one I saw in the article I read about the vote, so I knew I had at least one good prediction. But then I saw Martninez and Larkin. The standard error in my regression was around .07, so they were both about 3 standard errors above what I predicted. Also the size of the difference between what they got and what I predicted is very close to the biggest differenttials in my data set from the initial study. Maybe that means the voters attitudes are changing. I hope so. Maybe Edgar has a chance.

Look at Billy Williams. Here is how his vote progressed:

So they both started lower than Martinez. One shot up really fast and the other took a long time to make it, but they both did.

But look at Steve Garvey. In some ways, he has credentials that the voters often like. But he started out higher than Martinez and never made it.

The Mariners sent out a very detailed email to all the voters on how good Martinez was. Maybe that helped. And as new voters slowly come in who have more knowledge and respect for the newer, sabermetric stats, I think he might make it. Plus he seems to have been very popular among the fans, played for just one team and did not seem to be involved in any scandals.