To come up with this list, I looked for players who were:

For fans unfamilar with some of these terms, I attempt to explain them at the end of this post. I went with the top 120 for MVP shares because there were not many MVP awards given out before 1931. I went with the top 200 in Win Shares (WS) because about 40 of them are pitchers (through 2001). Some players had some WS after that and their totals were adjusted slightly but I still used the ranks through 2001. I also have only looked at players who are eligible. Pete Rose and Joe Jackson are not included.

The table below shows all the players I could find who fit at least 3 of the 4 criteria (plus the last two guys Tommy Leach & Jimmy Sheckard because they just missed making criteria #1 and did extremely well in WS). You can click on the table to see a larger version. Alomar has a career WARP of 63.6 at Sean Smith's site, ranking him 85th all-time. According to Baseball Reference, he had 1.91 MVP shares, ranking him 98th. He had 375 WS ranking him 53rd. He had 35.8 BFW, ranking him 79th. 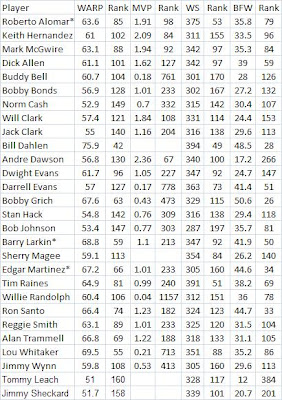 The first three players met all 4 criteria. So Alomar will be an interesting case. McGwire has the PED scandal. But Hernandez is surprising. He ranks so highly by different measures including MVP voting. So the voters saw something in him all those years while he was compiling a stellar sabermetric resume. Anyone have an explanation for why he is not in? I think all of the guys who meet 3 or 4 of the criteria deserve serious consideration. The players with a * will be eligible for the first time in this current vote. MVP stands for MVP shares. This list is not meant to be complete-only to show players who pass some major hurdles.

Dick Allen just misses making the top 120 in MVP shares. If he had made that, he would meet all 4 criteria. Andre Dawson looks very good except for his low BFW rating. The only place where Bobby Grich falls down is in MVP shares. Sherry Magee meets 3 of the criteria. The only one missing is MVP shares and they had very little of that in his day. We can say the same thing for Bill Dahlen, whose rankings are very high. Perhaps the most astounding MVP share is for Willie Randolph, .004, for a rank of 1157th yet his rankings in the sabermetric stats are great.

Now alot of career value is all well and good. But what about peak performance? (I tried to bring that in with the MVP shares). The table below shows how many seasons these guys had with 20+ WS, 25+ WS and 30+ WS. Bill James said that 20 WS is an all-star type season while 30 is an MVP type season. So I assume that 25 is an all-star/MVP type season.

I guess everyone will have to judge for themselves if any of these guys had enough all-star or MVP type seasons. But 10 or more all-star type seasons sounds pretty impressive. That helps Hernandez. 10 all-star seasons with his other high ranks should put him in. The following players all had 4 or 5 seasons with 30+ WS

Tim Raines should be in. It is a no brainer.

I also used BFW to find peak seasons. The table below shows how many seasons each player had a BFW of 2+, 3+, 4+,and 5+. I think a 2+ season is starting to put you into all-star territory while 5+ is MVP territory. This list is in alphabetical order. To see how the table works, look at Dick Allen. He had 10 seasons with 2+ BFW. That ties him for 41st all-time in such seasons (this was through 2005). He had 3 seasons with a BFW of 5+, good for a tie for 33rd. 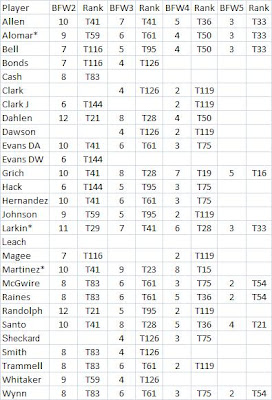 Many of these players rank very highly here. Look at Bobby Grich. He is tied for 16th in BFW5 seasons. Think about that. Only 15 players ever had more of these kinds of seasons than he did. I think many of these players do well here, showing that they achieved a very high peak value, not just a high career value. Blank spaces means they ranked too low to be worth mentioning. The next table might explain this. I think anyone who had 2 or more BFW5 seasons who also has high career total ranks should be in because only 91 players make this cut. 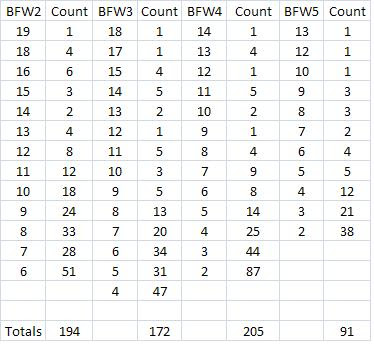 In many cases, as you might guess, there are many players tied for a certain position. The table above shows how many times each case occurred. For example, there was one player who had 19 seasons with a 2+ in BFW (I think it was Hank Aaron). There is a total of 194 players who had 6+ seasons in BFW2. For BFW5, only 91 players had 2 or more such seasons. If a player in the previous table has a blank, it means that he did not make the minimum number of occurrences in a given case. Norm Cash is blank for BFW3, meaning had fewer than 4 such seasons. Dick Allen is tied with 17 other guys for 41st place in BFW2.

Win Shares also includes all phases of the game in its rating. Bill James takes team wins and multiplies it by 3. Then he divides up those WS among the players and pitchers.

BFW rates players compared to the average. So it is like WARP except 0 is average. Usually WARP is -2. BFW also takes all phases of the game into account.

You appear to be mixing apples and oranges. You have three objective, sabermetric categories and one that is purely subjective, the MVP win shares.

That may be true, that 3 are objective and 1 is subjective. But they are not being "mixed." They are not being combined into any kind of composite rating. My point is that these guys rank highly in so many differently calculated measures, some objective, some subjective, that it supports their cause.