Did The Increased Use Of Relief Pitching Cause A Decline In Clutch Hitting?

This is mainly an elaboration on last week's post called Clutch Hitting Over Time (1952-2008). What I found was a correlation between the fall in percentage of games completed and clutch hitting (as measured by the difference between non-close and late (NCL) situations and close and late (CL) situations). Here, I just turn things around and make the measure of clutch CL - NCL (the two stats I used were AVG and isolated power or ISO).

The table below shows the AL AVG in both CL and NCL for the given periods. I broke things down by 3 year periods because there was alot of volatility from year to year (the Retrosheet data on this in the AL starts in 1953 and 1952 for the NL). The period averages are simple averages. The DIFF column is just the first minus the second and the last column is the percentage of games not completed. 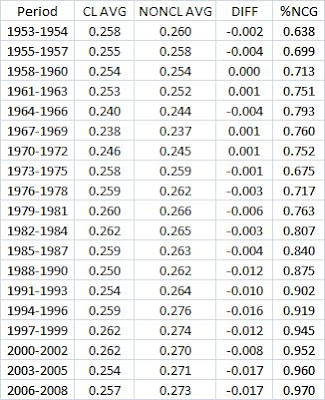 You can see that the difference has generally gotten more negative over time as the percentage of games not completed has increased (a proxy for the use of relief pitching). I was surprised to find that there were years when the AVG in CL situations was higher than in NCL situations. The next graph shows relationship between the last two columns from the table above. 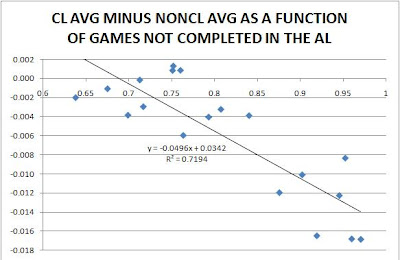 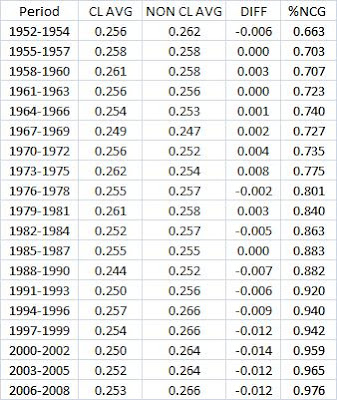 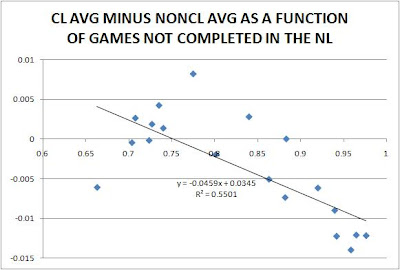 Interesting that the r-squared is so much lower in the NL. No reason comes to mind.

The next set of graphs does the same thing for ISO in the AL. 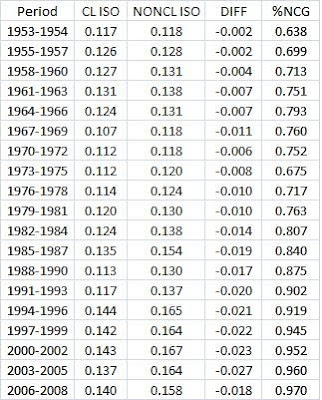 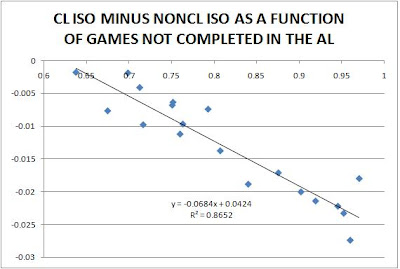 The .8652 seems very high. 86.52% of the variation in clutch is explained by the change in games not completed. Now for the NL. 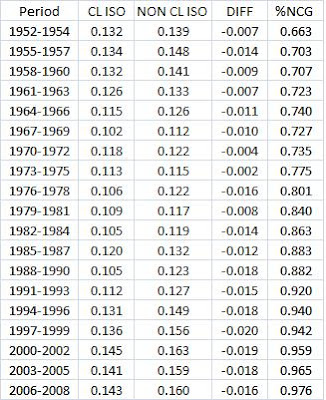 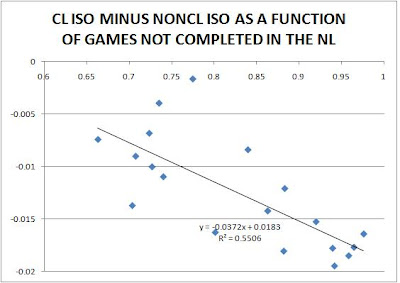 On NL/AL difference, perhaps the DH accounts for that? In the NL, pitchers are being removed for pinch hitters at times, not only because the manager believes a reliever can be more effective.

Did you try looking at number of pitchers per team as a measure of relief pitcher usage? It may be no better than NCG%, but it might be more a more sensitive measure, especially in recent years when the NCG% can't go much higher.

Thanks for dropping by and commenting. Glad you liked it.

You may be right about the DH. But I am just not sure. Maybe it means that the good relievers pitch more in the AL since they don't get removed for pinch hitters?

I also tried using % of batters faced by relievers. The correlations were generally higher. I will try to post those results today sometime. I think that is better than pitchers per team.

I don't think the issue is relievers getting to pitch longer in the AL, though that might be a small factor. More likely to explain the difference is that it's much more common for a good starter to be removed in the NL (because team elects to pinch hit). That narrows the gap between clutch and non-clutch hitting, which in turn gives you a weaker relationship to reliever use. Note that the clutch/non-clutch gap is much larger in the AL.

If I use % of batters faced by relievers instead of % of games not completed, the r-squareds for the NL were

In the AL it was

I sure don't know why things go in different directions for the two leagues. It looks like the gains in the NL are more than outweighed by the losses in the AL.

So this is another way of saying that relievers used in clutch situations are better than other pitchers in the league, right?

Which raises an interesting question: why is that? Where were all these great relievers 40 and 50 years ago? Were they still in the league, but as starters?

Thanks for commenting. I think you are at least partly right. It seems like every team's (or almost every team's) closer is better than average. Part of it might be more platoon advantages for pitchers late in games and also a batter does not get to face a tired pitcher he has seen 3-4 times already. I don't have an answer to your other questions, though. I hope someone can figure them out be because we might learn something important.