What Determines Vote Percentage In The First Year Of Hall Of Fame Eligibility? (Part 2)

I have tried to improve the model I used last week. It was an OLS (linear) regression model (next week I will present a logit or binary model which is non-liner simply looks to see if a player has made the Hall or not-it seems very accurate). This week I have converted some of last week's variables into a non-linear variables and I have added two new variables. At the end of this post I have links to some other research and discussion on this issue.

Here is the regression equation:

All of the variables were significant at the 10% level except for GGSQ7, which came close with a p-value of .13. The other variables all had p-values of under .02 with 6 under .01.

This has been the best linear model I can come up with so far. Many different variables have been tried. 154 of the 181 players were predicted to within 10 percentage points. 126 or 69.6% were within 5 points.

The graph below illustrates what I mentioned above about squaring and capping variables. Notice that the line is increasing exponentially then flatlines. 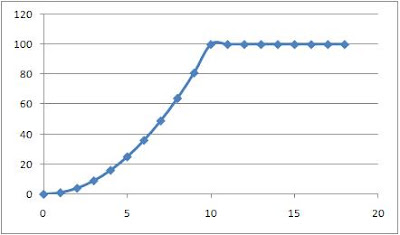 
Now the players who had the biggest positive prediction differentials.


I also ran a regression which had the following variables. None of them were squared or made non-linear. 2B, SS and C are positional dummies. All of these variables were significant at the 10% level. 9 were significant at the 5% level and 7 the 1% level. But the adjusted r-squared was .763 and he standard error was .126. So it does not work nearly as well as the model mentioned above.

Now some links to other research

Discussion of above article

Who's missing from the hall of fame by JC Bradbury

Modeling Election to the Major League Baseball Hall of Fame through the use of Genetic Algorithms By David Cohen
Posted by Cyril Morong at 4:28 PM