The Incredible Dominance of The 1936-39 Yankees

First, they lead their league in ERA, HRs, Runs, fewest runs allowed and SLG in all 4 years. And, if I recall correctly, their run differential of 411 in 1939 is the highest of all time (967-556). The following table only amplifies their regular season dominance (the lines are in order of the years starting with 1936). 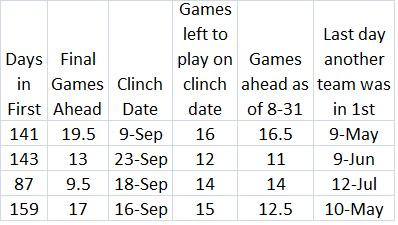 They spent 530 days in first place. That was about 80% of the time. The Indians were a half game ahead of the Yankees on July 12, 1938. But neither team had played 77 games yet. So no team besides the Yankees was in first place during the 2nd half of any of these 4 seasons. Where I have "Games left to play on clinch date," I simply added wins and losses and then subtracted from 154. I did not try to take ties or actual games left into account. So it is an approximation. But the lowest total was 12. That was the closest "race."

Then notice that no team ever finished closer than 9.5 games with the average games ahead being 14.75. Also notice that going into Sept., the closest anyone got was 11 games. In 1938, they went from being a half game behind on July 12 to being up 14 games up by Aug 31. In about 7 weeks, they gained 14 games.

You might be wondering if they kept up this dominance in the World Series. After all, they were playing the best the National League could throw at them. The table below summarizes what happened. 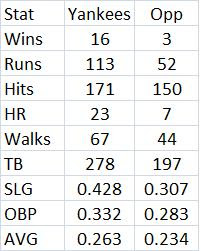 Notice that their edges in SLG and OBP are much larger than their edge in AVG (maybe they had a sabermetrician working for them back then). OBP just used walks, hits and atbats. They had 23 more walks while having huge leads in HRs and TB. Their winning pct against the NL champs was .842 while never losing more than 2 games in any one series. Their Pythagorean winning pct was .825 (runs scored squared divided by the sum of runs scored squared + runs allowed squared).

From other research, I have found that winning pct is about 1.21*(OPS differential) + .500. OPS is OBP + SLG. The Yankees had a .760 OPS while their opponents had .590. That would give the Yankees a pct of .706, not as dominat as what actually happened but still pretty impressive considering the competition.
Posted by Cyril Morong at 6:18 PM

I assume you read Neyer/Epstein's book on Baseball Dynasties, and the book "Legends in the Making"? They both had material on these teams.

Thanks for dropping by and commenting. No, I have not read either of those books. Have I basically covered the same ground they did?

Great stuff, Cy. I guess the HUGE home run differential explains why they scored many more runs without a big advantage in B.A.. Those were Gherig, young DiMag, Dickey, Henrich teams, correct ?

Thanks for dropping by and commenting. Glad you liked it. Yes, those were some of the big stars on those teams, although Gehrig played very little, unfortunately, in 1939.

well one factor that most are forgetting is in Ruth's day a homerun only counted if the ball laned in fair ground, even if the ball went over the fence inside the foulpole if it curved foul after it was a foul ball and did not count as a home runit has been Est. that Ruth would of had well over 1,000 home runs. you really cant compare baseball back then to today, things have change so much , new bats and gloves alone make it a whole new game.

I don't get your point. Ruth did not play for the 1936-39 Yankees. He had retired already