Should Sox Manager Guillen Have Been Upset?

After losing a third straight game to the Rays last Sunday, Guillen had a tirade, complaining about how players were not hitting and coming through with runners on base. Especially frustrating was scoring just 4 runs in the 3 losses and leaving 10 runners on base in a 4-3, 10 inning loss. He swore and wanted Sox GM Ken Williams to get some better players. But were the Sox underperforming?

Let's first look at what the Sox were expected to do and what they have been doing. The table below shows the OBP and SLG for the 9 Sox regulars and what they were projected to do in the Bill James Handbook. 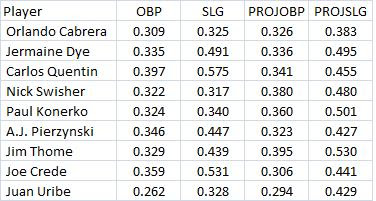 Alexi Ramirez was not included because he did not have a projection in the book. A weighted average of the projected OBPs and SLGs is .343 and .460 (guys like Quentin and Swisher were projected for parks other than U. S. Cellular Field, so that is a problem, but I hope not too big). This year, the league OBP and SLG are lower than last year. For OBP, it has fallen from .338 to .330 and for SLG it has fallen from .423 to .402. So if we give the Sox the same declines for their projection, they end up wtih .335 and .439 for their projections. How many runs per game should that bring them?

Based on regression analysis of all teams from 2001-03,

That predicts that the Sox should score 4.95 runs per game. Right now they are at 4.51. So that is almost half a run less per game than expected, a big disappointment. Their actual OBP and SLG right now are .330 and .416, also below projections. At those numbers, they should be scoring 4.62 runs per game but the actually are scoring 4.51. So that is a little lower than they should have, but nothing major.

Before the three game losing streak started in Tampa Bay about a week and a half ago, their OBP and SLG were about 0.324 and 0.416. So they should have been scoring 4.51 R/G while they were actually at 4.44. So the team was scoring about what they should have. So Guillen should not have been upset about scoring enough runs or leaving runners on base. He could have been upset about players not hitting up to expectations as shown above, but that is it. Also, the game they got shutout in in Tampa was started by Scott Kazmier, who went 7 IP and is one of the best pitchers in baseball. And Tampa has good pitching in general. Sometimes they will give up just 4 runs in three games. You can't go crazy when that happens.

On the flip side, the Sox have pitched better than expectations. Below are the ERAs for the Sox pitchers this year and their projections. Nick Masset is left out because he did not have projections in the book. 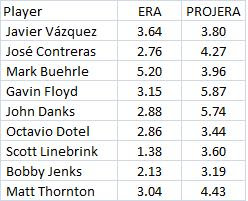 The weighted average of the projected ERAs for these pitchers is 4.45. But the league ERA is .37 lower this year than last year, so we can lower the prediction to 4.08. The Sox actually have a league leading 3.33 ERA, far lower than expected. So they are allowing .75 fewer earned runs than expected (and they were scoring .44 less than expected). So on balance, they are .31 ahead of expectations.

Are they winning the number of games they should this year based on their runs and runs allowed this year? They have scored 275 runs and allowed 226 runs. Using the Bill James "pythagorean projection," that works out to a .597 pct and 35.8 wins. They have won 34. So a bit of a disappointment, but not huge. Last week I showed that the Sox had won about 1 game less than expected based on their OPS differential.

As I stated above, the Sox were expected to be scoring 4.95 runs a game this year. Their expected ERA was 4.08. Add about .4 to that for unearned runs, and you get 4.48 runs allowed per game. Scoring that many runs and allowing that many runs would give them a .549 pct and about 33 wins, 1 less than they actually have. So overall, the Sox are doing about as well as expected when the season started and they are scoring about as many runs as they should based on their OBP and SLG. They are also winning pretty close to the number of games they should based on both OPS differential and runs and runs allowed. So what is there to complain about?
Posted by Cyril Morong at 1:30 PM