Both Tangotiger and Phil Birnbaum blogged about this after there was an article at Baseball Prospectus. One issue is what is Jones' "true" average. Here is my comment at Phil's site:

In the last 4 months last year, Jones batted .354. Just doing a cursory look at his Retrosheet stats, that comes pretty close to what his best 4 month period (within one season) might have been anytime in his career. But it was over only 353 ABs.

Anyway, combining the last 4 months from last year with this year, he has batted .378 over his last 580 ABs. And his yearly AVGs have been going up lately. Starting with 2004, here are his averages with his age

This does not seem like a normal aging/performance pattern. How unusual, I don't know. But I just wonder if something is going on or changing with this guy that makes it really hard to know his true ability.

One thing you might notice is that the average age is about 27 for both groups. Jones is 36. Cobb batted .400 when he was 35 but the league average was .285 that year, much higher than the NL average this year of .259. Cobb also had batted .400 twice before, had a much higher career average than Jones and batted alot higher the year before.

Barnes batted .400 in 1876 but I think that was the year you bunt a ball that went foul before it got to third or first base and it was still a hit. Dunlap did it in the only year of the Union Association. Notice that Jones' career average and average last year are far below what was normal in the past for .400 hitters. Same for the league average. Those are all just simple averages and in the case of Joe Jackson, he had only 75 ABs in his previous year and 115 ABs previously in his career. Taking him out would not change things much, with the last two columns being .344 and .377.

Besides Cobb, the only other guy to bat .400 since 1900 while being at least 30 years old was Bill Terry. But he did when the league average was .303. So when it comes to age, leage average and previous performance, Jones is not even close to what .400 hitters were in the past. If he does it, it will be amazing. I will wonder how he did it. 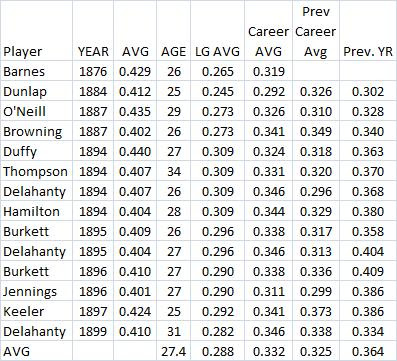 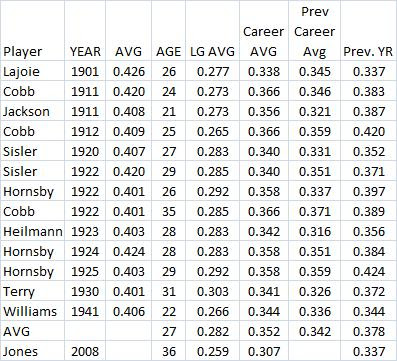